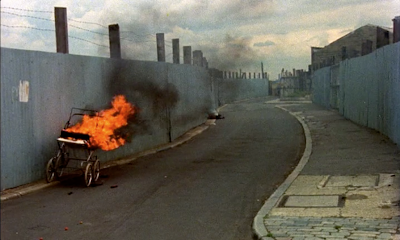 Jubilee is a 1978 cult film directed by Derek Jarman. It stars Jenny Runacre, Ian Charleson, and a host of punk rockers, including Adam Ant and Toyah. The title refers to the Silver Jubilee of Elizabeth II in 1977.

In Jubilee, Queen Elizabeth I (Runacre) is transported forward in time by the occultist John Dee (Richard O'Brien) through the spirit guide Ariel (a character from Shakespeare's The Tempest). Elizabeth arrives in the shattered Britain of the 1970s. Queen Elizabeth II is dead, killed in an arbitrary mugging, and Elizabeth I moves through the social and physical decay of the city observing the activities of a group of sporadic nihilists, including Amyl Nitrite (Jordan), Bod (Runacre in a dual role), Chaos (Hermine Demoriane), Crabs (Nell Campbell), and Mad (Toyah Willcox).

Numerous punk icons appear in the film including Jordan (a Malcolm McLaren protégé), Toyah Willcox, Nell Campbell, Adam Ant, Demoriane and Wayne County. It features performances by Wayne County and Adam and the Ants. There are also cameo appearances by The Slits and Siouxsie and the Banshees. The film was scored by Brian Eno.

The film is heavily influenced by the 1970s punk aesthetic in its style and presentation. Shot in grainy colour, it is largely plotless and episodic. Location filming took advantage of London neighbourhoods that were economically depressed and/or still contained large amounts of rubble from the London Blitz.
http://en.wikipedia.org/wiki/Jubilee_(film) 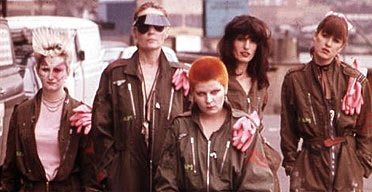 The film originated in Jarman's friendship with Jordan, the frontwoman for Malcolm McLaren and Vivienne Westwood's most outrageous designs for Sex and then Seditionaries - and a punk icon. Jubilee included several punk groups in this state-of-the-nation address - Adam and the Ants, the Slits, Wayne County - marking the start of a fertile relationship with the music industry.

On its release in 1978, the film polarised opinion. Many punks resented the intrusion of an outsider - most notably Westwood, who made a vindictive T-shirt denouncing the film and its maker. But, as ever in his films, Jarman caught an underlying essence in its foreboding aura and casual brutalities - a kind of truth. In fact, Jubilee was one of the rare feature films to come out of punk, and it remains one of the few visual records of London in jubilee year.
Jon Savage
http://www.guardian.co.uk/film/2008/feb/14/art.margaretthatcher 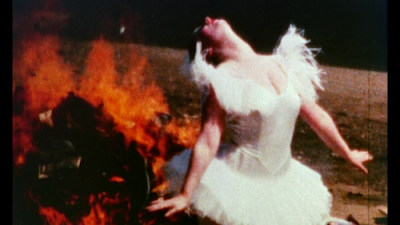 The film is both much less and much more than a tale of violent, directionless, deviant misfits: it cannot be contextualised as a "story" with "characters" because it eschews any representation of human qualities in favour of a sexualised mass of violence and anarchy. It is stark, blunt, and looks increasingly unsophisticated in its attempts to shock. However, precisely for these reasons, Jubilee encapsulates the ethics of effective punk cinema. Like Morrissey's Trash (1970) and most of John Waters' 1970s films, there is an outrageous, permissive abandon that serves to upset and unnerve the conventional cinemagoer. The characters could have emerged from a contemporary Carrollesque nightmare: they are unrestrained, unpredictable, volatile. And the cast is fascinating. Like Waters’ repertory company — Divine, Mink Stole, et al. — they are uninhibited and often prefer shouting to acting. Jenny Runacre had appeared in Pasolini's The Canterbury Tales (1971); Little Nell (aka Nell Campbell) was already something of a midnight icon from The Rocky Horror Picture Show (1975); a young Adam Ant, two years before British pop success, wanders amiably through the film; and Toyah Willcox, also two years before her short-lived postpunk, teenybop chart reign, scowls and swears as Mad, and is striking with a head of shaved ginger (she now presents religious and travel programmes on BBC TV). The late Ian Charleson, three years away from "respectability" and "prestige" in Chariots of Fire, is also here, shamelessly naked. He later tried to deny he'd ever been in the movie.

Ultimately, Jubilee is not pure Jarman: it is riotous rather than deliberate in its subversiveness, and it celebrates bi- and heterosexual promiscuity rather than homoeroticism (which is significant, given the rest of Jarman's oeuvre). Increasingly, the film seems like an anomaly in both Jarman's career and in the history of British cinema. For that reason, though, it will always be important.
Julian Upton
http://brightlightsfilm.com/30/jubilee.php 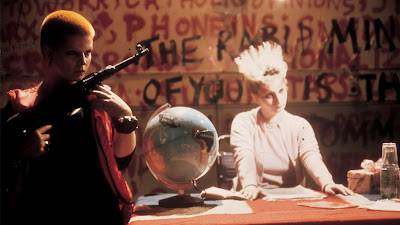 Jarman’s original idea for Jubilee was simply to record Jordan’s milieu on Super-8, in more or less documentary fashion, as a record of the times. But when he mentioned this idea to his producers, they saw that cashing in on the burgeoning punk movement might mean box office. They suggested a feature—for which, in order to set his vision of the age within a potent historical perspective, Jarman cannibalized an earlier, unproduced script called The Angelic Conversation of John Dee.

Dee, eminent scientist and confidant of Queen Elizabeth 1, calls on the angel Ariel to show his queen the future of her kingdom: a future which stands in stark contrast to the Arcadian serenity of the Elizabethan framework, centering as it does on a gang of six wild girls (including Jordan in the role of Amyl Nitrate) and the forays they make from their chaotic headquarters in Southwark into the equally chaotic urban wasteland that surrounds them. Meanwhile, in the background, pulling the strings and laughing insanely at the extent of his power, lurks the media mogul Borgia Ginz, who holds the whole of this splintered, violent world in the palm of his hand. Ginz has turned Buckingham Palace into a recording studio, and Westminster Cathedral into a throbbing discotheque in which Christ and the twelve apostles perform orgiastically before a gyrating audience. Sleepy Dorset has become a separate country where blacks, homosexuals, and Jews are banned, and Ginz can retreat to the splendid seclusion of the home he shares with the retired Hitler to pronounce with cynical satisfaction: “They all sign up in the end one way or another.”

The film opened in February 1978—exactly a year after Jarman had first put pen to paper—to decidedly mixed reviews. Its intensely private core (there is as much autobiography in the film as there is ostensible reportage) and somewhat uneasy mix of exuberance and bleakness—as Jarman himself put it in his book Dancing Ledge, “Just as it seems that it is settling down it’s off in another direction, like a yacht in a squall”—was too puzzling for all but the most entranced of viewers. Vivienne Westwood even went so far as to have a T-shirt printed, in which, at some length, she detailed why she despised the film. It was, she said, “the most boring and therefore disgusting film” she had ever seen. She could not “get off watching a gay boy jerk off through the titillation of his masochistic tremblings. You pointed your nose in the right direction then you wanked.”
Tony Peake
http://www.criterion.com/current/posts/267-jubilee

If you need your ex-girlfriend or ex-boyfriend to come crawling back to you on their knees (even if they're dating somebody else now) you must watch this video
right away...