First draft of the Nine Trades article I have written for the Skinny: 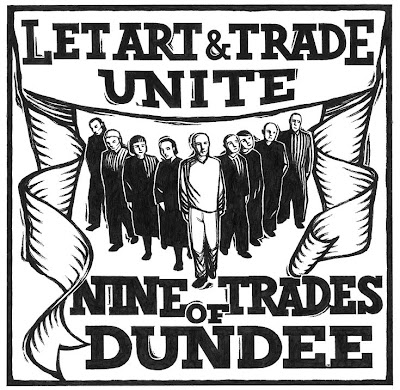 Like so many people thrust dazed into the big grown-up world after art school, I have to pay the rent somehow and this involves going to work. Instigated by the Duncan of Jordanstone College of Art and Design and funded by the Scottish Arts Council, Nine Trades of Dundee takes as its noble aim the bringing together of the lofty art world and the mundane workplace. These two areas of life would all too often seem poles apart. For Nine Trades, nine artists will each create a project that brings together their art practice and their day job, the goal being “a significant, inspiring and ambitious exchange and collaboration for both parties.” So far three projects are already underway in Dundee with myself, Alan Grieve and Fraser Macdonald trading in telephone banking, hairdressing and waste management respectively. All concerned have brought radically different approaches to the brief. Macdonald’s idea is to set up a team of ‘Garbologists’ who will be “recycling the notion of what an artist is by utilising/declaring acts performed as refuse collectors as artistic practice”. They have set up HQ in Friarton Depot and established “an art movement run like a trade union, with legislation and task lists.” Meanwhile working from Nori hair salon, Grieve has a ‘comment of the week’ wall of texts and drawings inspired by dialogue with his colleagues and clients. Eventually the material will be compiled and published as a magazine to be distributed throughout salons across Dundee. My own idea is to recruit call-centre colleagues who draw doodles during their working day, then training them in screenprinting at the DCA print workshops. The resulting artworks will be framed and re-presented on the walls of the office, engaging the workers with their unconscious artistic output. The ‘Automatic Drawing Project (Service Class)’ is at the halfway stage so far, and really the most gratifying thing has been seeing the enthusiasm and commitment shown by people who would never normally dream of setting foot inside an art gallery, yet alone taking a class in printing and being happy with the results. All the Nine Trades artists are keeping a blog to document their progress over the course of the project, and each will have a Duncan of Jordanstone student working as an ‘apprentice’ to provide valuable assistance and know-how in realising their task. So far the whole process has been a delight, and artists and tradespeople alike will be eagerly waiting to see the fruits of their labours.
Posted by _Black_Acrylic at 14:28