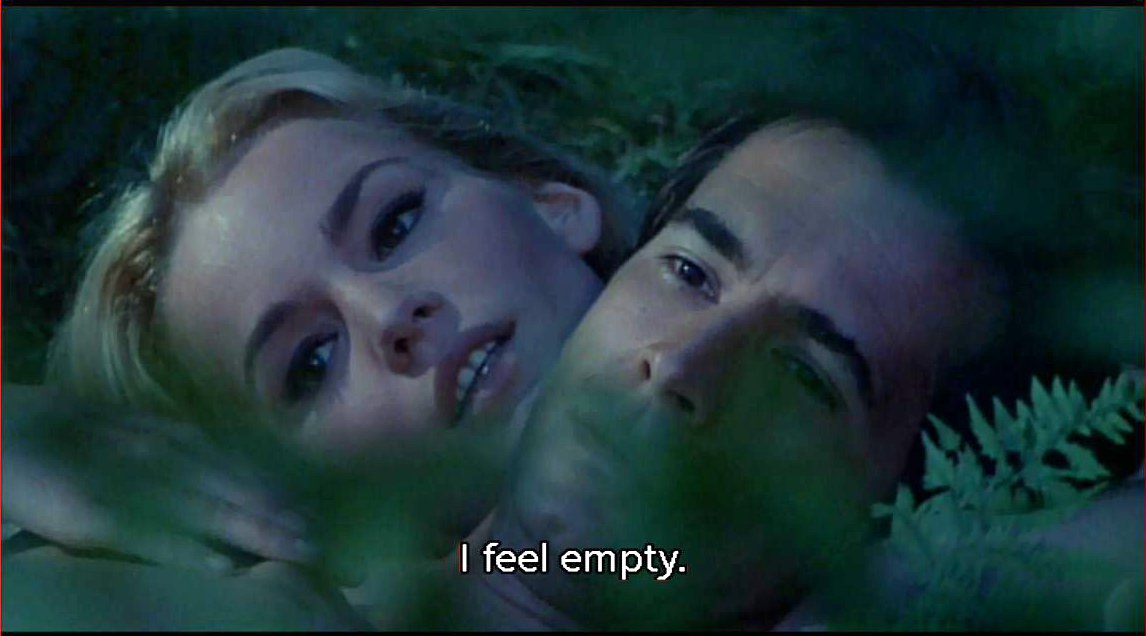 Pretty Poison (1968) is a psychological thriller directed by Noel Black, starring Anthony Perkins and Tuesday Weld, about an ex-convict and high school cheerleader who commit a series of crimes.

While not generally considered an example of neo-noir, the film does include certain elements of the genre, including a femme fatale, a character trapped into circumstances beyond his control, criminal protagonists and, of course, murder.
http://en.wikipedia.org/wiki/Pretty_Poison_%28film%29

This film is one of my all time favorite films. I've never really understood why Noel Black wasn't given the green light for almost anything he wanted to do after this. I suppose this film must have been ahead of it's time. It's well structured, and the performances are great. Weld is captivating. Perkins plays the whole thing perfectly. The film also has a real sense of place about it. This isn't just any old town in America, it's a very specific town. The relationship between these two characters is perfectly drawn. I was very impressed by the interplay of naive and knowing. What a great ending. Why Noel Black wasn't given more support is a mystery to me.
stooze
http://www.imdb.com/title/tt0063456/reviews?start=20

Tuesday, née Susan Ker Weld, got her first taste of fame in 1959 at age sweet 16 on the CBS teen sitcom The Many Loves of Dobie Gillis, in which she played dreamy, creamy Thalia Menninger, the obscure object of desire pined after by Dobie in spite of the fact that she was avaricious and callow and all a-jitter on Coca-Cola and puberty. Weld was beautiful, blond, sun-kissed with freckles, and could round out a pair of hot pants, but her milk-fed beauty came alongside a lip-gnashing delivery that betrayed a head buzzing with distractions, her voice sometimes antsy and tremulous, other times tripping over itself in an impetuous rush, an alarm of dangerous possibilities.

Like any good study in couple's psychopathology, a familiar relationship is visible here, but in a parodic, mutated form. In clear stages, Pretty Poison details the gradual inversion of Dennis and Sue Ann's power dynamic—a transference of roles between the apparent exploiter and deceiver and the apparently exploited and deceived. Self-possessed Sue Ann takes the driver's seat and winds up dropping Dennis off at her convenience, like a distracted mother ("Hasta luego, nut!"), while he is left stammering his story to a pair of detectives from the Kafka Agency. Locked away all those years, Dennis doesn't realize that innocence isn't what it used to be, so it's he who winds up losing what is left of his own boyish trust. The measure of the movie's cynicism: It doesn't deal in predators and prey—only in predators of different species.
Nick Pinkerton
http://www.villagevoice.com/2012-02-01/film/pretty-poison-film-review/ 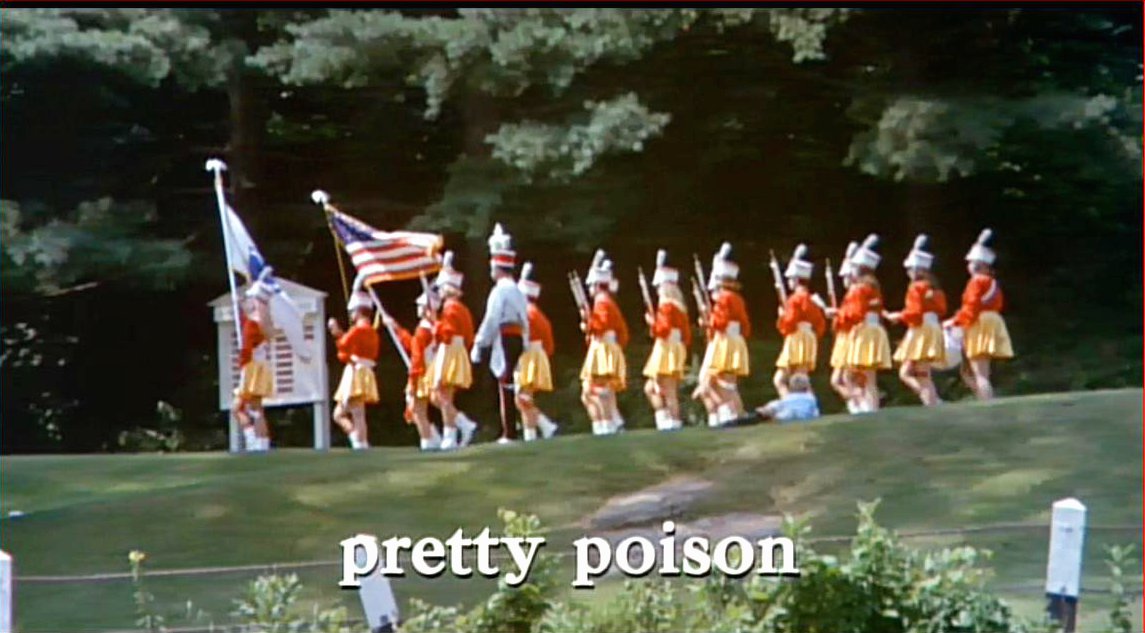 A simmering small-town New England noir with an acidic comic streak, Pretty Poison retains its vintage 1968 aura, a studio film casting stars as its unlikely and unsavory couple, linking the blood-spattered eros of Bonnie and Clyde (produced the year before) with coming indie pulp like the The Honeymoon Killers. Showing its social jaundice between grotty bursts of violence, it casts Anthony Perkins (at 36 still in his disturbed-young-man phase) as Dennis Pitt, a onetime juvenile arsonist whose flights of fantasy "have no place at all" in the world awaiting him upon release from years in an institution. Dennis settles, in hermitlike fashion, in a western Massachusetts town, assuming a quality-control job at a lumber mill that dispels pink waste into local waterways, listening to Russian broadcasts on the short-wave radio in his trailer, and creating a delusional identity as a CIA agent that eventually lures flag-squad schoolgirl Sue Ann Stepanek (Tuesday Weld, smiling with faux-precocious frankness) into a game of undercover playacting and moonlit trysts. The movie's big joke is that Sue Ann turns out to be the potent, sociopathic one; for once, Perkins is out-psychoed by an honor-roll student who worries she'll be late for hygiene class.


Director Noel Black, in his first and only celebrated feature, has the era's typical zooms and second-long flashbacks (to Dennis's burning youthful home) in his arsenal, but utilizes his leads' strengths in making Lorenzo Semple Jr.'s dialogue, adapted from a novel by Stephen Geller, play as a cracked, baroque duet. Perkins's deadpan, stilted spy nonsense ("We're striking a blow for every decent citizen in this area") sounds like the delirious hambone speeches Semple wrote for the loopy Batman TV series, though it's Weld—who reputedly loathed her performance—at the center of the movie's indelible images of a teen queen playing at murder: straddling a corpse in the shallows of a river or taking charge of vengeance against her sneering, chain-smoking mother (Beverly Garland). "She looked surprised" is Sue Ann's spacey analysis of her senior-year rebellion's latest casualty, and Pretty Poison dodges having her taste for mayhem come off as misogyny; rather, it's the complement to her feckless boyfriend's pronouncement, "You do have quite a capacity for loving."
Bill Weber
http://www.slantmagazine.com/film/review/pretty-poison

Do you love Coke or Pepsi?
SUBMIT YOUR ANSWER and you could win a prepaid VISA gift card!