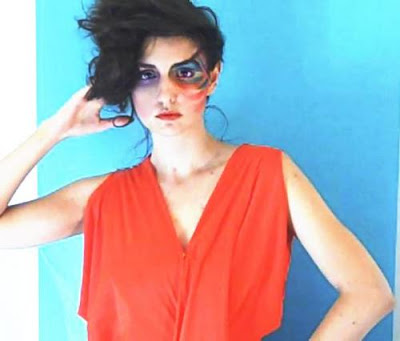 Bio @ genevajacuzzi.com:
Geneva Garvin (aka Geneva Jacuzzi) is a songwriter, visual and recording artist from Los Angeles, California. In her music she has honed a blithe and cryptic wit filled with sultry puns, double entendres, and irreverent references to mysticism and the occult. From 2004 to 2007 she fronted the tongue-in-cheek goth band Bubonic Plague, an influential cult favorite in the burgeoning scene in LA’s Echo Park district.

Her music has used styles that range from darkwave, goth, lounge and tropicalia. She recreates these sounds in painstaking detail on a portable 8-track cassette recorder.

Her recent recordings have zeroed in on a discarded period in electronic funk and dance music associated with groups like Morris Day and The Time, El DeBarge and Zapp & Roger. She infuses these styles with elaborate instrumentation and harmonically complex textures that are technically difficult to achieve using her recording equipment. These distilled instrumental pieces often last under 30 seconds.

She has also developed a collage-art style that she uses to package her own music and Ariel Pink’s Haunted Graffiti albums. Like her music, her album covers consist of other album covers, intricately re-worked and shuffled so as to give the impression of a sensuous time in contemporary music, while avoiding specific references or quotation. http://genevajacuzzi.com/gjbio.htm

Lamaze review @ Mishka Bloglin:
Rare is the artist able to make a bunch of tracks recorded over five-some years feel just as cohesive as if she’d done them all three months ago, but ladies and gentlemen, meet Geneva Garvin. The LA lady behind Geneva Jacuzzi has been steadily self-releasing these smoky, lo-fi synthpop singles since 2004, and Lamaze is our first comprehensive view: an entire career-so-far of hissy 80s dance jams that flow and ebb together, destined for each other, like some lost Kate Bush album produced by Johnny Jewel. Even brand new jam “Do I Sad?” is virtually indistinguishable as new at first; it’s just another neon tile on the dark-disco floor.

But Garvin isn’t a musician in stasis. Though Lamaze’s tracks aren’t paced by year, know to listen for it and you’ll hear the delineation between earlier, more schizophrenic sound collages and the structural clarity of the latest work. You’ll notice tour partner Ariel Pink’s influence on “Love Caboose”, how the analogue warmth develops, the darkness deepens, Garvin’s voice broadens and writhes. Lamaze’s cohesion isn’t a lack of forward movement; it’s Geneva Jacuzzi’s unwavering point of view that does it, this “Sex Dwarf”-era Soft Cell vibe gluing together every song, from the skittery 8-bit “Future Past” to the hot and bloody “Group Dynamic”. Garvin takes a serious cue from the Marc Almond school of songwriting: mangle all 13 tracks of backing vocals, program the beat frantic and creepy, put the bass in octaves and make those synths scream, but for the love of god, let the hook breathe.

And those hooks, that inherent sense of where to place melody and how, throws Geneva Jacuzzi into the totally irresistible category. You’ll walk away from Lamaze humming something, and every song—I mean, every single one—offers something to hum. And not just any old thing; these amazing, 80s-authentic, dark synthpop melodies that rival even GJ progenitor Soft Cell for most memorable. These tracks may have been quietly circulating for the past five years, but Lamaze brings them finally into the light, in the most drop-dead sexy way. Here’s to the next five, Geneva.
http://mishkanyc.com/bloglin/2010/11/18/review-geneva-jacuzzi-lamaze/
Posted by _Black_Acrylic at 14:31