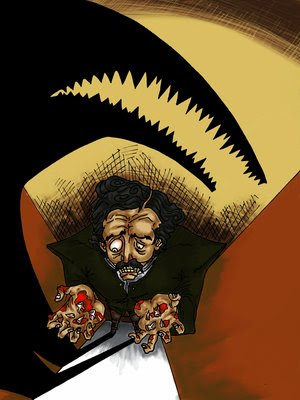 There came a light tap at the library door, and pale as the tenant of a tomb, a menial entered upon tiptoe. His looks were wild with terror, and he spoke to me in a voice tremulous, husky, and very low. What said he? - some broken sentences I heard.
He told of a wild cry disturbing the silence of the night - of the gathering together of the household - of a search in the direction of the sound; and then his tones grew thrillingly distinct as he whispered me of a violated grave - of a disfigured body enshrouded, yet still breathing - still palpitating - still alive!
He pointed to my garments; - they were muddy and clotted with gore. I spoke not, and he took me gently by the hand: it was indented with the impress of human nails. He directed my attention to some object against the wall. I looked at it for some minutes: it was a spade. With a shriek I bounded to the table, and grasped the box that lay upon it. But I could not force it open; and in my tremor, it slipped from my hands, and fell heavily, and burst into pieces; and from it, with a rattling sound, there rolled out some instruments of dental surgery, intermingled with thirty-two small, white and ivory-looking substances that were scattered to and fro about the floor.
Posted by _Black_Acrylic at 12:36