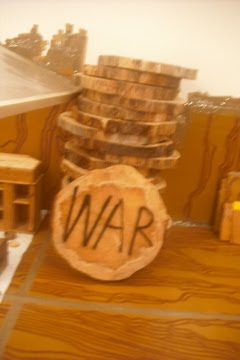 In the supplementary notes to Thomas Hirschhorn’s show It’s Burning Everywhere, there’s a telling quote from Dostoyevsky’s The Possessed: “I really don’t know if it’s possible to watch a fire without some enjoyment”. For the huge, immersive installation that fills Gallery 2 of the DCA, it’s impossible not to feel a shiver of pleasure when confronted by the sheer spectacle of all this chaos of stuff. The room is filled almost floor to ceiling with painted cardboard, dismembered mannequins, strip lights, wooden objects and masses of jerry cans, much of it held together by miles of parcel tape. Some mannequins (termed “subjecters” by the artist) stand mutilated behind glass in an improvised shop window display, while others have come in wedding regalia bearing silent witness to the carnage before them. The middle of the room is dominated by a vast fallen tree sculpture diagonally intersecting the area, and slogans have been spraypainted around the place; WAR shouts one. It’s very clear indeed that bad things have happened here. The experience is one of overload, overkill, a deliberate assault on the viewer with text and image used as the artist’s weapons of choice. There’s no chance of escape from the barrage of visual information that assaults the eye from all angles.
Elsewhere, in the gallery’s ancillary space, works from Hirschhorn’s Ur-Collage series pair fashion magazine adverts with war photography to create, in the artist’s words, “a new worldview”. These works are utterly consistent with the defiantly unsubtle tone of the whole show, a (lack of) feeling inherent in twenty-four hour rolling news channels being just a punch of the remote away from fashion week catwalks. Supermodels share newspaper space with disasters of war, a state of affairs that may strike as jarring and discomfiting, but then that’s entertainment.
Posted by _Black_Acrylic at 13:52