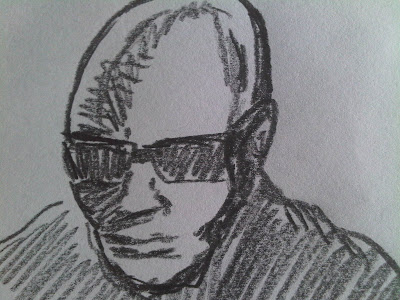 Listening to this set by Melvin Oliphant III and it does indeed jam so hard. Watch out for the righteous edit of Anne Clark - Our Darkness around 37 mins: LINK

Resident Advisor bio:
Traxx is a lover of music — one with a passion so intense that it overcomes genre divides to weave an altogether original, exciting, and multi-textured musical fabric which envelops both the avid clubber and the home listener, as well as everyone in between. Not content to be labeled as merely a DJ, a producer, or even a DJ/Producer, Traxx is a self-described “artist of sound.” A sound that is distinctive and highly emotional which defies classification and invites analysis and discussion. From eclectic and avant-garde tunes to old school jack tracks and far beyond, Traxx hears and makes it all without discrimination, pretension or elitism.

Traxx has released music on numerous underground labels in the US and Europe including Gigolo, Relief, Muzique, M/O/S, and Crème. His music has come to the world under a bucket load of alias' including Dirty Criminals, XX Art, Mysterio, ViLLan X, Saturn V (with Tadd Mullinix), X2, and more. He's also collaborated with the cream of the underground including acts like James T. Cotton (aka Tadd Mullinix), DJ Hell, Green Velvet, D’marc Cantu, Mount Sims, Legowelt and many more to shape his unique definition of Jakbeat. Now finally Traxx is stepping out into the light with his first full length album under this own name for his own Chicago based imprint Nation.

Traxx's earliest musical memory is his being a young boy spinning 45 records on his toes. His mother has the picture proof. His first instrument was a handmade flute in elementary school, music it seems was just always going to be on the books for Traxx. Like many in Chicago, Traxx was drawn into house music through the legendary WBMX radio shows and two trips to see Ron Hardy at the legendary Music Box. Describing his first experience with house, Traxx recalls "nothing could compare, things were being discovered..this period stays with me because of the intense energy that was applied - it's a feeling, an emotion, a mental state of transcendental connection -a spiritual force with the higher being through the physical vessel of the body."

His first release appeared on DJ Hell's Gigolo label in the early 00's under the collective alias The Dirty Criminals. The Dirty Criminals was a Chicago based collective that featured mainly the work of Melvin working with collaborators like Charles Manier, William Torres, Daryl Cura, Brendan M. Gillen, Matt Nee, Josh Werner, Stephen Hitchell and Tadd Mullinix plus early on work from Jamal Moss aka Hieroglyphic Being. In addition to a number of 12"s Dirty Criminals released two albums very well received in Europe - 2004's "Organized Confuzion" and 2006's “Collision Between Us And The Damned" which featured a cover of an early unreleased version of "Acid Tracks" by Phuture that was played around Chicago. Traxx also contributed vocals to the track "Let No Man Jack" on Hell's "NY Muscle" album.

But it is perhaps on his many mysterious 12"s that Traxx has set the ground work for this his first solo album in the last three years where there's been a constant stream of them burning up dance floors with their wild new jakbeat sound. In an age of digital perfection Traxx is analog, when he DJs he plays vinyl and when he's in the studio he uses hardware. His sound recalls the past but pushes for the future with an overtly emotional and experimental approach. In addition to releasing music for other imprints Traxx also started his own label Nation which has allowed him to develop and recontextualize the various aspects of his sound.
http://www.residentadvisor.net/dj/traxx/biography
Posted by _Black_Acrylic at 16:25