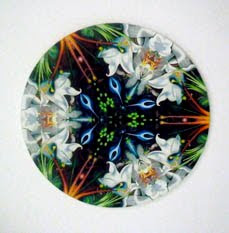 A spaced-out cosmic bliss suffuses much of the work at the Embassy’s new show. Channelling the spirits of Sienna Miller and the 21st century satirist Michel Houellebecq, we’re promised a trip in search of enlightenment and oblivion, the artists drawing “poi patterns across a melting sky.” It seemed quite apt for Smile to open in a week when riots were splashed across the front pages, as hippiedom and social unrest have shared a bed throughout pop cultural history. Warhol’s would-be assassin Valerie Solanis makes an appearance in Sach Kahir’s film Mick Jagger Hates You, and Charles Manson is namechecked in the gallery handout, haunting the shadows of the psychedelic haze. The inquisitive search for belief informs many of the pieces here. Circular Kaleidoscope paintings by Ronnie Heeps flank a photo self-portrait by Sophie Lisa Beresford, her face painted blue and displayed high up on the wall as a Hindu Goddess. The depiction of multiple deities might be a symptom of celebrity or it could just be schizophrenia. On the opening night Beresford staged a performance upstairs in the ‘Meditation Room’, leading the crowd in a "Rave Meditation Dance" with the aim of freeing up their energy. Seeing the Edinburgh art audience shed their inhibitions to a soundtrack of Spanish Makina Techno music certainly made for a memorable experience. It did what art can only very occasionally do, transcending the everyday and making us all smile.
Posted by _Black_Acrylic at 17:02