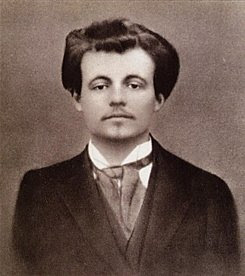 "Turkestan! A magnificent subject, and fortunately one with which I am perfectly conversant. The Orient, my friends, the unfathomable Orient..." In a moment he was discoursing on the Turks, Istanbul, Pierre Loti, Aziyadé. ... Recalled to the subject at hand, he protested: "The subject! What else am I discussing? Since when is a digression out of order? Why, Cicero himself in the Pro Milone ... Seneca too was of the same opinion ... and we must not forget Quintilian, gentlemen ..." Turkestan made a reappearance for a few seconds, only to be followed by a rapid sequence of topics strung together with intricate and faultless eloquence, the terrestrial Paradise, Genghis Khan, Persian poetry, Mehmed II, Saint Sophia, the Suez canal, whatever else could be imagined. The audience was submerged, and then the bell rang. "Gentlemen, we have only managed to consider the most preliminary aspects of this vast subject, albeit not too inadequately. We shall return to the subject tomorrow, at the point where this swinish bell is forcing us to stop."

He never did return to it, but henceforth I found Jarry's mental processes disturbing. When he let himself go he seemed in thrall to words outside his control. It was no longer a person speaking, but a machine controlled by a demon. His staccato voice, metallic and nasal, his abrupt puppet-like gestures, his fixed expression and uncontrollable flood of language, his grotesque and brilliant turns of phrase, ended up provoking a feeling of disquiet. He was informed, intelligent, and discriminating; he was a good person, secretly kind, perhaps even shy beneath it all [...] but his originality resembled nothing short of a mental anomaly.