Francis Upritchard - A Hand of Cards 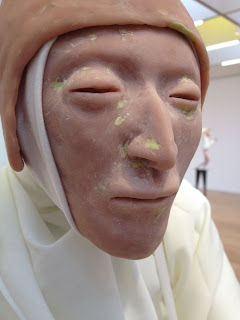 Her second solo museum show, at Nottingham Contemporary in 2012 was called A Hand Of Cards.
http://en.wikipedia.org/wiki/Francis_Upritchard

Already well established as an object-maker, a sculptor often incorporating found objects in her work, she decided in 2007 to explore the figure. "I didn't think there was so much good figurative work in contemporary sculpture," she explains. 'I went to Munich and saw [the 15th-century sculptor] Erasmus Grasser's Morris Dancers.'

Upritchard and Gamper bought their current space with Silver in 2009, when Gamper was evicted from his flat upstairs as the property went on the market. Upritchard's studio, reached through Silver's noisy workshop, is exceptionally clean and empty, the army of figures having decamped to Nottingham for an exhibition. One remains, bewigged and inscrutable, as witness to our conversation, while modelled heads lie on the window-sill. Upritchard points out their unlikeable expressions, saying you have "to allow them to be as ugly as they wanted to be – I find them quite gross." They are "found in newspapers or photographs of friends".

I ask about the clothing she has put on some of her figures and she says she has made it all herself. "I had dolls and I made all their clothes. I was on the sewing machine when I was three years old. I really like making stuff.'
Karen Wright
http://www.independent.co.uk/arts-entertainment/art/features/in-the-studio-francis-upritchard-artist-8076688.html

Francis Upritchard’s psychedelically coloured human figures “live” on islands of ornate furniture. There is a festival feeling to their gatherings, emphasised by Upritchard’s acid-bright colours, hand-woven blankets and tie-dyed silks. Upritchard has said “all the things that hippies hoped would happen, or felt might happen, didn’t.” In one sense her exhibition is about the failure of the 1960s and 70s counter-culture that is still celebrated at festivals – and its gaudy, individualistic “alternative” aftermath.

Originally from New Zealand and now living in London, Upritchard makes figures that appear archaic, yet they also seem to be devotees of contemporary cults, marooned in an alternative universe, ineptly groping after spirituality. We are left with artefacts as clues to meaning. Here Upritchard both draws on and parodies contemporary craft techniques in a series of dislocated domestic settings. For this exhibition she has worked with her husband, master furniture maker and designer Martino Gamper. The sculptures amongst the furniture become explorers.

Upritchard also works closely with contemporary writers – including the acclaimed novelist Ali Smith, who has written an essay on Upritchard’s exhibition here. Upritchard has also used her exhibition at Nottingham Contemporary to revisit the medieval myths of Nottingham. Some of her works that play on disappeared societies and have migrated into the Alfred Kubin galleries. Despite working a century apart, the two artists share a visual language of dreams, and inhabit the dark side of the domestic. Strange creatures, including Upritchard’s sloth, echo Kubin’s disturbed animalistic imaginings, and have made their home here.
http://www.nottinghamcontemporary.org/art/francis-upritchard 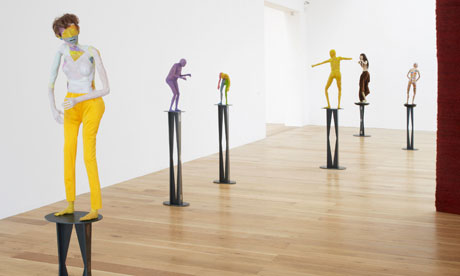 Francis Upritchard's rainbow-skinned figures may have stooped shoulders, sagging bellies and bald heads, but they never stop dancing. These hand-modelled, marionette-sized creations bend their knees and wave their arms, raver-style, absorbed in trance rhythms only they can hear. Others around them strike tai chi or meditation poses. But they all keep their eyes shut, refusing to connect.

Upritchard made a name for herself in the early 2000s by turning consumer tat into ritualistic objects – a biscuit jar reworked as a funeral urn; an ancient Mummy whose tributes include a pack of B&H instead of a gold bar. She often referenced tribal cultures like New Zealand's Māoris. Turning the tables on colonial anthropologists, she drew analogies between the cheap trinkets westerners amass and talismans and amulets traditionally used to protect against evil spirits.

For the mysterious soldiers in her current show, A Hand of Cards. Inspired by British history and myth, including the Bayeux tapestry and Robin Hood, they wear chainmail or white costumes with billowing sleeves, striking balletic fighting poses. They seem locked into war, as if elegantly choreographed by an invisible puppet master, though who they are fighting is unclear.
Skye Sherwin
http://www.theguardian.com/artanddesign/2012/aug/30/artist-week-francis-upritchard Upritchard has said that, for her, ‘The hippy is a point of failure.’ In a recent interview, the artist remarked: ‘All the things that the hippies hoped would happen, or felt might happen, didn’t. Now they are trying to do it on an individual level, but they are still failing.’ Like Paul Thek’s The Tomb (Dead Hippie) (1967), a long-haired wax mannequin which was modelled on the artist himself, Upritchard’s sculptures seems to indict the political naivety of the 1960s and ’70s. Nostalgia is sharply revoked, even killed off.

Upritchard works mainly in Super Sculpey, a polymer clay. Her awkward dolls are alarming yet vague; they seem to be imbued with a desperate bid for life, rather than life itself; a desperate bid to know and not know. The single moment of communion in the show occurs between two decapitated heads, part of a mock-indigenous necklace fashioned out of a tennis racket (Men Who Hongi, 2006). The heads touch noses, about to kiss. On closer inspection, they are not lovers, but twins, each an imperfect image of the other. Here is Upritchard’s echo, a truncated narcissus gazing at his own reflection.

The eeriness of the work belies its political urgency. If the countercultural movements of the 1960s sought to liberate the collective as well as the individual soul, to give social meaning to the notion of losing oneself, now a nihilistic darkness prevails. Such a darkness is evident in these figures’ inward-looking eyes.
Zoe Pilger
http://www.frieze.com/issue/review/francis-upritchard/

eToro is the most recommended forex trading platform for new and pro traders.

There is shocking news in the sports betting industry.

Watch this now or stop betting on sports...

You could be eligible to receive a $500 Ikea Gift Card.