Street Trash is a 1987 comedy horror film directed by J. Michael Muro (credited as Jim Muro). It won the Silver Raven at the Brussels International Festival of Fantasy Film. The film has acquired a status as a cult classic horror-comedy and is one of a number of movies known as "melt" movies.
http://en.wikipedia.org/wiki/Street_Trash 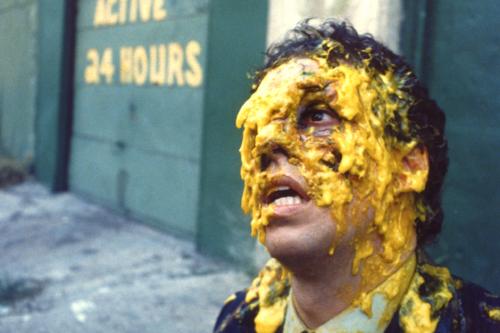 riotously funny unlegit horror as the local bums and winos end up melting after resorting to the neighbourhood liquor store's dollar-a-pop Viper drink - for such a low budget movie it's amazing how much energy and devotion have clearly been invested in the special effects, the sound, the script, and the acting
William Bennett
http://williambennett.blogspot.co.uk/2010/04/fillmore-discos-46.html

On the theatrical aspect, its as if it was a project film created by an Arts school collective: from film direction,writing,acting,special effects,and cinematography. Lots of crude dialog and dark humor in the writing,unique use of camera angles and effects,colorful special effects and engineering,and a laughable satire of the many different cultural genres and norms. One thing thats believable is its casting. Their are as many twists in the movie that come from the singular event at the beginning of the film that carries the viewer through many different subplots that interweave themselves to its original storyline. For those who appreciate shows like "Robot Chicken", this is a film one can have fun with.
David Hartner
http://www.imdb.com/title/tt0094057/reviews?start=30

Street Trash is a rare example of the art in that it is exceptionally well-made. Most pictures of this ilk tend to be less than impressive from a cinematographic perspective, but here the image is bright and crisp. Hence the graffiti- and litter-adorned New York slum locations, plus all the exploding tramps therein, are rendered in exquisite detail. This is unsurprising considering that cinematographer David Sperling was a genre veteran and first-time director Jim Muro (later credited as J Michael Muro) would himself go on to become one of the most highly regarded cameramen and cinematographers in Hollywood. For many years he was James Cameron's first choice Steadicam operator.

The plot revolves around a consignment of out-of-date hooch and its devastating effects upon the daily lives of a dysfunctional community of hobos living in and around a New York junkyard brutally ruled by a violent, PTSD-afflicted Vietnam veteran with a penchant for ultra-violence. Of course, the ramifications of the toxic beverage go way beyond its impact upon coping mechanisms, contributing to emotional instability and causing long-term liver damage. Fortunately the results for the audience are not ill-smelling, overbearing and depressing but deliriously entertaining, gooey and hilarious.
Andrew Stimpson
http://thequietus.com/articles/10252-street-trash-jim-muro-roy-frumkes-25-years-on

Street Trash is a film that takes no prisoners. It’s unabashedly perverse. In terms of pure sleaze and unadulterated tastelessness, it rivals Pink Flamingos. You thought Divine eating dog shit was disgusting? Wait until you see the junkyard game of keep-away with a severed penis in Street Trash. As far as melt movies go, it’s right up there with Body Melt and The Incredible Melting Man as one of the most entertaining of its kind. So rewind your 1988 Lightning Video VHS, or cue up the Synapse special edition DVD, because Splatter Shack brings you 10 Reasons to Love Street Trash, a movie that becomes increasingly potent with age… just like a bottle of Tenafly Viper.

Roy Frumkes claimed, “I wrote [Street Trash] to democratically offend every group on the planet.” He was successful. If the necrophilia scene doesn’t disrupt you, then you are desensitized to a point of reckless abandon. There are so many scenes that cross boundaries in Street Trash, and only for the sake of crossing boundaries, that it’s simply exhilarating. How so?

The offensiveness isn’t serious. It’s obviously artificial and exaggerated: it’s camp. In her 1964 essay, Susan Sontag claimed: “The whole point of Camp is to dethrone the serious. Camp is playful, anti-serious. More precisely, Camp involves a new, more complex relation to “the serious.” ” In all of its un-pc, outlandish lunacy, that is precisely Street Trash’s accomplishment. Self-consciously ridiculous, it makes a tall tale out of human depravity; it’s a liberating mockery of seriousness. Street Trash is not only funny, it’s anti-serious. How can you not love it?

Melt movies usually have superb, gory special effects. Of its kind, Street Trash has some of the most creative and grotesque effects ever staged. Not only do human bodies melt, explode, and disintegrate by chemicals, they do so with vibrant bursts of colorful slime. Street Trash is truly a movie that disgusts with all colors of the rainbow. Why show vomit when you could show bright purple vomit? The gore is comical on the one hand (Saturday Night Live‘s makeup artist Jennifer Aspinall worked on the effects team), and surreal on the other. The sanguinary moments of the movie give it a cartoonishness. It makes Evil Dead 2 look like Cinema Verite.
the-diabolical-dr-ross
http://splatter-shack.com/10-reasons-to-love-street-trash/

Professional trading signals sent to your cell phone every day.

If you want your ex-girlfriend or ex-boyfriend to come crawling back to you on their knees (no matter why you broke up) you must watch this video
right away...

(VIDEO) Win your ex back with TEXT messages?