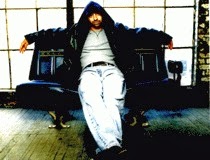 Neil Ollivierra is a Detroit-born multi-disciplinary artist who composes electronic music as The Detroit Escalator Co. He first appeared in the early Detroit techno scene as the promoter of The Music Institute (1988-89); the legendary underground after-hours club that served as the pre-release audio testing grounds for the Transmat, KMS and Metroplex record labels. A growing acquaintance with resident DJ Derrick May led to his employment as the Transmat label manager during the labels' most prolific years (1988-1992), wherein legendary artists such as Carl Craig, James Pennington, and Stacey Pullen first exploded onto the global scene.

The first album by The Detroit Escalator Co., entitled 'soundtrack (313),' was released in 1996 on London-based Ferox records. The album, now out of print and rare, is considered a cult-classic. The 2nd album by The Detroit Escalator Co., entitled 'Black Buildings,' was Neils' first recording for Peacefrog. Concurrent with the album production, he completed a long-planned series of acrylic oil paintings as part and parcel of the Black Buildings album project. The paintings abstract, monochromatic geometric landscapes were the subject of a solo exhibition at Detroit's Cpop Gallery. Today these paintings hang in homes and corporate environments in Detroit, Los Angeles, San Francisco, Chicago, Paris and London. In 2000, Peacefrog released a collection of early-era recordings and previously unreleased tracks by The Detroit Escalator Co., entitled "Excerpts."
http://www.discogs.com/artist/5207-Detroit-Escalator-Company-The?anv=Detroit+Escalator+Co.%2C+The

On The Detroit Escalator Co.’s second full album, Black Buildings, Neil Ollivierra manages once again to coax emotion from machines. The bass seems a bit more pronounced, as if he were constructing solid foundations for these buildings -- but keep in mind that bass does not always translate into kick drums. “No2,” for instance, swims in the bass, but manages an ambient elegance. Mark my words, the compositions are solid. “Manual Transmission” thrums with beauty; “Gathering Light” continues the ambient beauty. “Fractal (In)” glistens and shimmers; “Float” is pretty much self-explanatory. The Detroit Escalator Co. makes one-of-a-kind music. Just listen and you’ll agree.
scoundrel
http://www.discogs.com/Detroit-Escalator-Co-The-Black-Buildings/release/37364

Like the writing in his unpublished novel, Reality Slap, Neil Ollivierra’s creative gifts in music and painting have been used to explore themes of city space, blackness and the creative process. But unlike his paintings, which hold shapes that seem to fill the canvas like film stills from Tron, Ollivierra’s music touches a level of arrangement and emotion that his static paintings have never achieved alone. It is in his music, in the handful of overlapping EPs, singles and “albums” that he has made as Detroit Escalator Co., where Ollivierra has excelled.
Black Buildings — which is not to be confused with the 2000 EP of the same name, which features a number of tracks also on the new LP — continues where his earlier music left off. The songs here act as finite sonic environments, most only a few minutes in duration, which use slower, ambient textures to kill off techno’s dance-floor straitjacket (inherited from house) in favor of explorations into mood and space.

Pieces end almost as quickly as they come, with normally one strong original theme, provided by a bass line or synthesizer, repeating to hold the piece together. Though ambient in nature, there is percussion throughout the album, reminiscent of drum-and-bass, but without the “Amen”-slap, adding and releasing tension as the track dictates. There are deep and moody cuts such as “Ghana” and “No. 2,” faster, driving moments on “Manual Transmission” and even organ-painted, gothiclike moments on “Sil Lum Tao.”

Though there are sampled acoustic touches (a guitar on “Folding Space” and “The Inverted Man”) on the album, there are none of the real-life samples of Ollivierra’s previous work, allowing any casual listener to potentially file it into the ephemeral world of the headphone-sound track. Yes, the cityscape can be imagined in songs such as “Freeway,” and “City Lights.” But the audience is forced to work that much harder to hear Ollivierra’s serious observations within the synth-vamps, aquatic drum sequencing and daisy-chained beauty that he has created. It is a testament to Ollivierra’s work that this is such a pleasure.
Carleton S. Gholz
http://www2.metrotimes.com/music/review.asp?rid=15770

AMG: What was the inspiration for the Black Buildings theme?

NEIL: The project arose out of my interest in slowing down to examine the dimensions of sound and visual space. With regard to sound, my interest stemmed from my observation of Gerald Simpson's tenacious pursuit of perfection with respect to his programming and recording processes. I didn't have the opportunity to observe him at length, but the time he took in exploring and stretching the capabilities of his tools made a really strong impression on me. I took to exploring the stereo space as I'd never done before.

I'd come home from work and program new sounds in a project studio I'd set up. Taking a cue from Gerald's slow-motion approach to musical exploration, I'd spent weeks working on a single program. It was a grand time. I worked like this for years, compiling sketches and programs and musical phrases, exploring and learning as I went.

As for visual space, the benefits I obtained by slowing down my process of music composition inspired me to likewise slow down the manner with which I'd long observed the world aroundme. While I'd for many years dashed through life at a mad pace in order to see, smell, hear and taste everything imaginable, I learned the benefits of slowing down for the purpose of observing greater detail. When I managed to slow myself down and smell the flowers, so to speak, a whole new world began to open up to me. I found myself amazed and entertained by the smallest pleasures, the tiniest details.


I kept a mechanical drafting pencil at my desk at work in Chicago, along with a stack of vellum paper and a ruler. Between phone calls, I'd sketch modified blueprints of my office cubicle on these sheets of paper. I imagined the angles of the paneled walls surrounding me taking on vast proportions, akin to geometric landscapes. I began to deconstruct them and re-assemble them as abstract sketches, architectural in nature. By the time the job ended, I had 15-20 of them, a few of which I thought were pretty good. I knew that I wanted to see them realized as very large format canvas paintings, rendered in monochromatic shades of blue.

But I had no idea how to execute the crisp straight lines required to achieve the result. I researched for a process, and in this way discovered that H.R. Giger used an airbrush to achieve his detailed masterpieces. And that's when I knew that I was going to take up the airbrush. A classmate of mine from school was making quite a name for himself as a graffiti artist in Chicago at the time. His name was Carlos Rolon, aka Dzine. He was teaching airbrush classes at an art supply shop in Wicker Park, and I signed up. It was Carlos who first showed me how to use an airbrush and compressor, over a period of a few days, in that shop in Wicker Park.
http://www.ambientmusicguide.com/pages/features/NeilOllivierraInterviewPart3.php