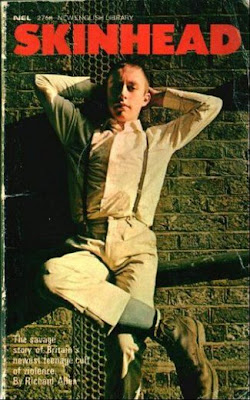 Extract from Iain Sinclair, Lights Out for the Territory:

Richard Allen, laureate of Plaidstow (its most notable celebrant since Luke Howard), struggled to bastardise the last croak of the London proletarian novel (which was no longer acceptable for publication). Former practitioners were now marginalised: Alexander Baron in Golders Green ("I don't know who the publishers are anymore"), Emanuel Litvinoff still at work, wondering if the latest reissue of Journey Through a Small Planet would find a readership, Bernard Kops knocking out radio plays. Allen could afford to contemplate these matters from a remoter perspective - his comfortable stockade in deepest Gloucestershire. With what the poet Paul Holman perceptively describes as "the genuine pulp writer's trance", Allen's cut-ups of newsprint did achieve moments of prophetic vision. The fireplay of a written-out consciousness at the end of its tether. His suedeheads of the early Seventies, boot boys travestied in mohair, progressed to the Stock Exchange. They were the first jackals of the Me Generation: "An anti-social, anti-everything conglomerate affecting status as their protective cover whilst engaging in nefarious pursuits more savage, more brutal than other cultists have seen rise - and fall - in this past decade."
Yes, Allen is the one to blame, the magician who caused fiction to be brought to life, the man who envisioned the Savile Row knuckleheads of the free-market: Lord Joseph's scum progeny. Even the Cotswolds, where Allen hid himself away as a country squire with a secret life, suffered as its energy field was warped by the aural vampires of Cheltenham, the Listeners of GCHQ, tappers and transcribers obliged to record everything. This whirlwind of bad sound - interfernce, hot sheets, babble - went rogue, manifesting its venom in the corpse gardens of Gloucester, racism in local politics, a cult of Hell's Angels, unexplained outbreaks of meningitis and necrotising fascilitis. The mythical anti-career of Brian Jones. The malign triangulation of royal residences.
Posted by _Black_Acrylic at 14:18