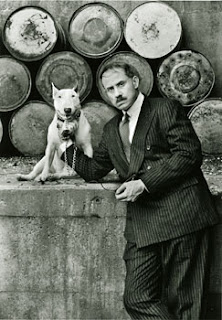 Extract from Iain Sinclair, Lights Out for the Territory:

The blokes who had dragged their chairs into the sunshine, outside the London Dog Centre in Middleton Road, were extremely courteous and helpful when I pitched around there with my copy of the Ellroy blockbuster, and asked them to identify the breed of lounging lapdog. "Bull terrier," they said, with evident approval. "About £300 a throw. Handsome indoors. Good as gold with the kiddies. Lovely animal." Of course, they saw through me at once. They smelled it. I wasn't in that league. Twenty minutes of hack work and I might make the down payment on a secondhand goldfish.
Ellroy merits the full studio treatment, the Marion Ettlinger portrait. Flecks of grey in the cropped hair and moustache, tailored seersucker jacket with a wet-nosed dog the size of a small reindeer lolling across his lumpy bits. Man and animal have the same quizzical/psychotic eye, the same sheen of achievement and earned repose. The bull terrier has a jangle of keys and disks around its neck (dog tags?) - as if it were the keeper of the estate, a butler in white fur. The whole set-up is, consciously, reminiscent of Stubbs, Reynolds, the classic country house portrait: dogs first, women and children to the rear. New money defined by its livestock holdings. The bull terrier was the bite manifest in Ellroy's driven prose, but it also possessed an iconographic gravitas. It repudiated Ellroy's "reputation for strangeness". Domesticity, the acquisition of property, and the selection of animals, all came together. "I got married in December," Ellroy told the journalist John Williams, "we've got a dog now."
Posted by _Black_Acrylic at 20:48