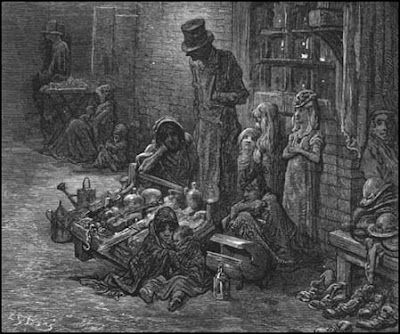 Sheer need drove many women towards prostitution, and there were other social forces that encouraged it. Commercial prostitution is more an urban than a rural institution, and many of the people who were being packed into the industrial and seaport towns had become emancipated from traditional restraints without being subject to new ones. Whatever the barbarisms of agricultural society, the cottager who drew attention to himself - and more particularly herself - by openly flouting conventional morality was likely to pay for it. If life in the industrial jungle was no harsher than in the countryside, it was chancier, more disorientated, and in important ways a lot freer. The promiscuous woman in Liverpool or Salford, Stepney or Bermondsey, had opportunities and inducements to prostitute herself that were not to be found in a country parish.
Paradoxically, some current social attitudes, explicitly hostile to loose living, actively promoted prostitution. Nothing in the literature of the time is more striking than a tendency to lump all unchaste women into one category. Apart from the innocent - yet forever 'soiled' - victim of a single seducer, any woman contaminated by fornication was put practically on a level with the professional harlot. Such conventional notions, however at odds with reality, can have immense influence on everyday conduct. Under their sway appearances become all-important. When social commentators spoke of a young woman who had mothered a bastard as half-way to the streets, they had good reason; for though these girls were not always thrown onto the world with no resource but prostitution, they did carry with them permanent evidence of a debasement that, by common convention, fitted them for just that fate. Careful women drew away, men were emboldened. The fallen girl from a decent family was less likely to be restrained by social pressures than encouraged to promiscuity and the rewards of prostitution. Like most of us, she was apt to do what was expected of her.
(...)
If prostitution was often better than the miseries of respectable poverty, there remains the hideous side of the picture. Not every tart was a lively girl, dancing in the casinos or joining a party of men for supper. On city pavements there were plenty of wretched beings worn out with age or disease, alcoholics, semi-imbeciles, female jetsam of all kinds, soliciting an almost inconceivable interest in their dishevelled bodies, or offering to cooperate in the squalidest perversions for a few coppers. Even in the streets of St James's, the focus of smart and competitive harlotry, a number of these creatures were to be found maundering about after dark (sometimes with veils over their pocked faces), scarecrow warnings to the brightly dressed street-walkers.
Posted by _Black_Acrylic at 22:55