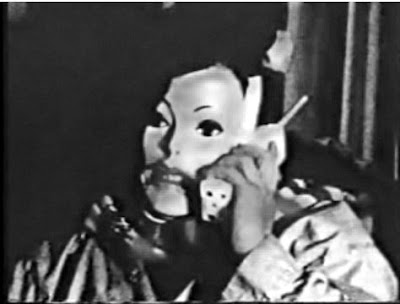 Shaye Saint John describes herself, with the caps-lock key forever on, as THE WORLDS RECORD HOLDER FOR HAVING THE MOST PROBLEMS! Her star shines brightly even among the attention-deficit-disordered parade of freaks and curiosities that makes up Web 2.0, and in such company there’s no denying she’s got the OMG WTF factor in spades. Based in California, Shaye appears in a series of 2 and 3-minute short films (or “triggers”) on her own YouTube channel and on her maddeningly labyrinth, impenetrably HTML-botched website. She documents her life spent on a compound for physically challenged people, a self-portrait in a state of perpetual confusion and conflict, sometimes in a wheelchair, sometimes walking, floating or dancing, sometimes whatever else she feels like doing. These videos show her fractured face and prosthetic limbs, the quadriplegia the legacy of an unspecified accident, all fed through a digital FX shredder and edited with a clinical just-so comic precision. Shaye talks non-stop in a speeded-up panicky monologue, the voice of Porky Pig speaking in tongues, an amphetamine Alvin Chipmunk addressing all her split personalities in turn. I first became aware of the phenomenon through the writer Dennis Cooper’s blog, which in May hosted a special Shaye Saint John Day suggested by the young Norwegian artist Kier Cooke Sandvik. Says he, “One of the best things about Shaye is how varied the reactions to her are, and how that seems to say something about people. I, like Dennis, don't feel very creeped out by the videos, while others seem to think they're nightmare inducing. I think they're hilarious. Shaye's constant enthusiasm, even in the face of horrors like her face being burnt to a crisp, is the funniest and scariest thing, I guess.”
Although details are sketchy, the 92-minute Triggers Compilation DVD credits one Eric Fournier as writer and director. In a 2005 interview with Bizarre magazine Shaye described him as being “among the few people that I truly trust” and claimed that he “lives in my guesthouse and is at the ready with his camera when I have a little notion.” The film’s distributors, the Los Angeles-based Indican Pictures, were unavailable for comment. Shaye’s last MySpace login was back in 2008, leaving her fans posting various “where’s Shaye?” messages, and really the best source of information is the anonymous postings left on blogs and messageboards where the devoted can meet up and exchange rumour and hearsay. Shaye is a group of four Chicago art school alumni. Shaye is a performer at the California Institute of Abnormal Arts. Shaye is Fournier in a dress, wig and mangled mask. No commentary or insight from her creators is forthcoming, so for now Shaye exists entirely in her own self-generated funbubble, her audience communicating mostly via the comments pages on her YouTube channel:
almadora (1 month ago)
you terrify me... i love it... i cant stop thinking about your stuff... who are you??
scary as hell... brilliant. i've already caught myself doing 'the hand thing...! (!!) " help me...!