A Trash Humpers Dialogue with Ryan Weir and Ben Robinson 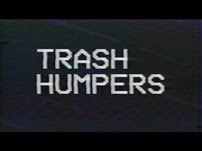 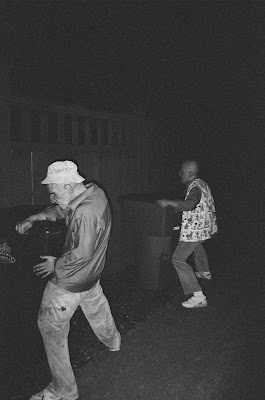 Wow, lucky you! The use of degraded VHS tape to film Trash Humpers really gives it a unique look. But yeah, I think being engaged by or attracted to someone or something for which there isn't an easy explanation is a common occurrence and it's definite Harmony Korine territory. The characters wear these outfits with such lurid colours. It's maybe not conventional beauty but it's captivating, and quite possibly sexy. Tracksuits in fucshia and lime that the recording technology heightens to eye-wateringly intense levels, and it presents the world in a new, startlingly different way. It reminds me of being around 11 years old and fooling around with some friends in the wooded area behind my house. For example, during the film I left to go take a piss. We came across a set of photographs in proper Boots packaging in the middle of a path but the pictures inside had clearly not been developed in Boots. The water in my toilet is bright blue, but the bleach was turned to green on contact with my urine. They were essentially 'dirty pictures' of various girls on swings or on chairs, breasts and vaginas exposed, but their faces were hidden because of the lighting and some of the images ran from one photograph to the next. The scene was framed by my bright red slippers and it was just an intensely beautiful experience. None of the girls were particularly attractive but you can imagine this nonetheless sent all kinds of crazy feelings rushing through our scrawny bodies. Werner Herzog was an early champion of Korine's work. It wasn't just the naked girls but the whole question of their origin and the illicit nature of their production that enthralled me. During a 1997 article for Interview magazine he famously said, "What I like about Gummo are the details that one might not notice at first.” We were all fighting over what to do with them and how we could divide them but already I had decided if I alone couldn't have them then no one could. “There's the scene where the kid in the bathtub drops his chocolate bar into the dirty water and just behind him there's a piece of fried bacon stuck to the wall with Scotch tape.” And so I swiftly deposited them down the nearest drain, much to the bemusement of my friends. “This is the entertainment of the future." It wasn't even the pictures I couldn't bear sharing but the whole experience; the packaging, the moment, the thrill of the found object. I think that's a good way to approach Trash Humpers, to look out for those "fried bacon and Scotch tape" moments of artistic clarity. Hours later I returned to that drain alone and in the dark but they were gone. During the film I believe there are many such moments.

The film really brings home how Korine is an artist who is able to capture a specific place. Well I think looking at it that way certainly gives you more in terms of something you can take from the film but it's not really up for giving anything away too easily. Just as the paintings of Ed Ruscha define a vision of California, a vision of billboards, empty spaces and gas stations, so Korine sees the landscape of Nashville. Living outside the major cities, the abandoned trailers and deserted car parks are instantly recognisable symbols of the banality of life and I suppose Korine is happier in the repressed south because it's modern life stripped to the bare bones, no more or less worthy a setting than the back alleys of New York, just more fun and interesting for what it leaves out. Trash Humpers sees his vision taken to its logical conclusion with a renewed emphasis on destroying the landscape. But yeah, I don't think Korine read the newsletter about art having a contractual responsibility to provide wholesome entertainment to the masses. Smashing TV screens with hammers, throwing a stereo up in the air then watching it crash to the floor, this is what the end of the world will look like.
Posted by _Black_Acrylic at 22:59