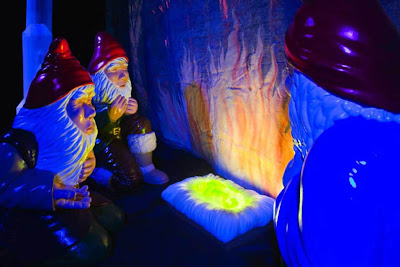 Extract from On the Beyond: A Conversation between Mike Kelley, Jim Shaw, and John C. Welchman:

Mike Kelley - My initial teen-age drug experiences were just about fun. I smoked pot socially for laughs. I was, however, interested in altered states of consciousness. This was, primarily, politically motivated. I thought, as many did in the late 60s, that our culture needed to be shocked out of its complacent notions of reality and that, perhaps, drugs were one way to accomplish this. I whole-heartedly supported drug use, even though I was not very druggy myself. I had read Aldous Huxley’s The Doors of Perception in high school. I was familiar with Timothy Leary’s ideas and the general hippie notion of the use of drugs for “mind expanding” purposes. But, as I said, I was not psychically well-suited for it.

Jim Shaw - There was that brownie episode …

MK - Yes, when I was in my last year of undergraduate school I ate a spiked brownie and had an intense hallucinogenic experience.

JS - It wasn’t a pleasant one.

MK - No, it was horrible. I hallucinated for days; I could not tell the difference between thought and reality. I was time-traveling, space shifting, age shifting, persona shifting. I couldn’t experience myself as a coherent being. There were constants jumps in POV. This experience changed my life. I have not trusted the concept of “reality” since that time. Art is my replacement for this type of drug-induced, or religion-induced, search for expanded consciousness. Art is not so loaded with importance to me. It is a safe zone to explore the meaningless and the ecstatic. I like the fact that it has no social value. At least, it didn’t used to. I have little tolerance for “metaphysics” any more.
Posted by _Black_Acrylic at 20:53