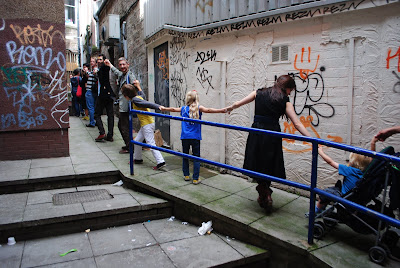 The Dundee Live festival took place over nine days in July and was the brainchild of the artist and facilitator Jonathan Baxter. During the festival, a poetic and liberating response to the city began to emerge through a variety of artworks, performances, exhibitions and events. I caught up with Jonathan after the festival to discuss its impact and potential effect on Dundee’s art scene:

What is Dundee Live?

What were the aims and were they achieved?

The aims were quite simple; to show that Dundee is a city in performance: the tide ebbs, rain clouds gather, people saunter in the street, grown men weep etc. We also wanted to celebrate some of the creativity that takes place in the city.
(In a minor key, I also wanted to show that a festival doesn't need a huge amount of funding, and that if artists and non-art organisations work together, surprising things can happen.)

What artists and institutions were involved in the festival?

The festival was curated by me, Jonathan Baxter, on behalf of D-AiR (Dundee Artists in Residence). Over 30 artists, from a variety of disciplines, participated in the festival - and others came out of the woodwork as the festival progressed. Commissioned artists included Lindsay Brown, Sarah Gittins, Derek Lodge, Pernille Spence, and Mary Sommerville. There were also two group shows. One, a co-curated show at the Hannah Maclure Centre entitled Soil. The second, a show at the Central Library entitled, 'Mappa Mundi'. We also worked in collaboration with Scottish Dance Theatre, DCA and GENERATORprojects. Venues included the Botanic Gardens, City Square, Olympia Leisure Centre, and Tayside Recyclers etc.

The response was wonderful. Every event was well attended - often with a significantly different crowd for each event. And because we had a wide range of work, often in unlikely places, lots of people encountered the work. For example, Lindsay Brown's 'Drift' performance was both a live event in the river Tay - at 7am and 9.30pm - and a video installation, to be seen whilst swimming in the Olympia swimming pool. This meant that those who knew about the event could attend the performance, but it was also made accessible to people who hadn't heard about the festival. Having seen the video whilst swimming, people then enquired about the rest of the festival. This happened repeatedly: one artwork acting as a doorway into the wider festival.

Will there be more Dundee Live events in the future?

Well, the aliveness of Dundee certainly continues! When last I looked the city was bathed in sunshine. As for a repeat of the festival my confusing answer is yes and no. There'll certainly be something next year but the bunting might be black.