Charles Ray (born 1953) is a Los Angeles-based American sculptor. He is known for his strange and enigmatic sculptures that draw the viewer’s perceptual judgments into question in jarring and unexpected ways. Christopher Knight in the Los Angeles Times wrote that Ray’s “career as an artist…is easily among the most important of the last twenty years.”

For Unpainted Sculpture (1997), over the course of two years, Ray has reconstructed a life-sized crashed Pontiac Grand Am (circa 1991) out of fiberglass, casting and assembling each piece to match the bent and twisted forms of the original. Despite the work’s misleading title, it is painted a soft dove grey that is reminiscent of the plastic parts of model car kits.
http://en.wikipedia.org/wiki/Charles_Ray_%28artist%29 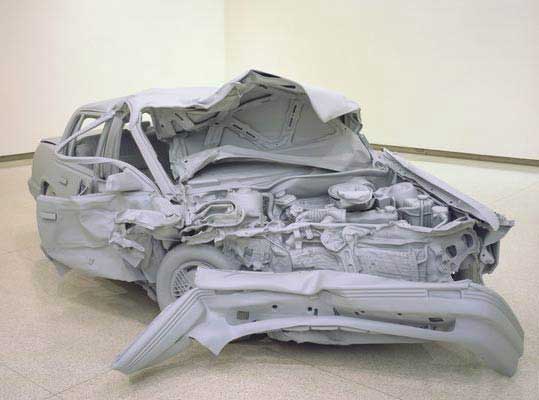 The Art that I would like to talk about is the Unpainted Sculpture by Charles Ray, which is the spray painted car that we talked about in class so much. One of the main reasons people did or didn't like the piece was because it was modeled after a car that someone had died in. I think the fact that someone died in the car makes you think about how smashed up it is. Ray once said "It mattered to me that somebody had looked at it, and I wanted to make it matter to you." (Michael Fried, and Charles Ray, “Conversation”) about his sculpture Hinoki, but I think the same idea applies to this sclupture as well. Before I knew that I just thought oh that car is just kinda smashed up, that's kinda fancy, but after you know the context of it you look at it differently. You see every little piece of twisted metal in the car, every bend. I was picturing the car running into something and this person being thrown around the car and everyone around them rushing over to help, calling 911, and cops and paramedics showing up, the whole thing. I think it also helps for me because I have been in an accident similar to that, same side of the car smashed and everything, though obviously not as bad. So the knowledge that someone didn't make it through that really hits home. I think with me though whenever something happens in my life I always know that somehow it will turn out alright, which I believe is the opposite of Charles Ray, who seems to have a slightly more pessimistic way of viewing things.
Lucy
http://lucyblogforoad.blogspot.co.uk/2009/03/re-assesing-walker.html

DENNIS COOPER: Can you remember how you got the idea for Unpainted Sculpture?

CHARLES RAY: Well, I was working on the Fashions film. I hadn't actually made anything in a long time, and there was a catalog that got sent to me from a show. One of my big mannequins was on the cover. I saw her hand out of the corner of my eye, and I remembered working on that hand, and its spatiality. It made me yearn to work on something with form again. Then later that week, I was out to dinner with the young artist Tim Rogeberg, who was my student at the time, and some other people, and Tim's car was smashed up. He was debating whether to take it to the body shop, and I said, "Why don't you just take a fiberglass mold of the wrecked fender and put it back on?" It was sort of a joke, but Chris Finley was with us, and he said, "That would be a good piece for you to do, Charley," and it just stuck with me. So that was the entrance.

DENNIS: But at some point it became about death too.

CHARLES: No, never per se about death. I spent a couple of months looking for a wrecked car that was really sculptural. I went to all these insurance yards, and I was looking at ones in which fatalities had occurred. I don't believe in ghosts, but I wondered that if there were ghosts, would the ghost inhabit the actual physical molecules of the structure, or would it be more interested in inhabiting the topology or the geometry of the structure? You know, if you were to duplicate the geometry, would the ghost follow?

DENNIS: Do you think it has in some way?

CHARLES: When I first got the car to my house, it was all bloody, and it had much more of her presence then, I think. What's more interesting to me than thinking about ghosts is thinking that that car had a whole life. When we took it apart, we saw evidence that it had been in a serious accident before the fatal one. I figure it's starting its life over again as an art object. I think about its life - from the factory in Detroit, through the wrecks, then ending up in my hands, and now it's ended up in another weird assembly line in my studio, and it's going back out again. It has a funny trail of identity.

DENNIS: Did it give you pause when Princess Di died in a car wreck?

CHARLES: No, no. It more gave me pause when I heard they were making a movie of Crash. Ballard was a big influence on me, but not in terms of this project. More in terms of the figurative work, the relationship between sex and technology. My fear was that the piece would be seen as like an advertisement for the movie, but I got over that, and now I'm interested in the topicality of the car wreck as a counterpoint to the abstraction. The piece has wound up being really abstract. It's moved away from the specific.

DENNIS: Do you find that, knowing about the possible misassociation with Crash, you've consciously covered your bases, either in the conceptualizing or in the physical construction of the piece?

CHARLES: The only thing that covers the bases really is the title, Unpainted Sculpture.

DENNIS: What about the decision to make it gray? Originally you were going to replicate the look of the original car, paint and all.

CHARLES: The decision to make it gray was a long time coming, through a reckoning with the form. I started to think of it as like the fade-ins and outs in movies, because a lot of it is sort of blank, like a pause. Part of that decision was due to financial limitations, but it's a better piece for the decision. I think the piece has my very best and my very worst in it. It has a bit of my showoffiness, and my sensationalism and grandstanding. Like everyone told me, "It's impossible. You can't take a mold of a wrecked car like this." And I said, "You can. You have to think of it as a thousand small sculptures." That's what we did, made a mold of every piece and assembled it back together. So it has my worst, like I said - my showoffiness - but it also has my best, I think, in its uncanniness. I hope it draws people in.
http://www.indexmagazine.com/interviews/charles_ray.shtml

Unpainted Sculpture is a meticulous recreation in fibreglass of a crashed Pontiac Grand Am (circa 1991) where everything from engine hoses to cracked tail lights, carpet texture to coin holder is carefully replicated. Despite the work’s misleading title, it is painted a soft dove grey that is reminiscent of the plastic parts of model car kits (genuinely unpainted), intimating an irrational shift in scale not dissimilar to many of the artist’s recent works. The monotone grey just as importantly serves to equalise every square inch of the wreck, so that as one’s eyes probe the bulges and recesses, all details become significant and are shown to be mutually dependent on the overall dynamics of the composition. Thus, as frontal impact has sent the bonnet billowing backwards into the cockpit, so has it incrementally rippled the roof and popped the rear doors askew. The viewing process is intensified by this egalitarian dynamism, but also by the spectacular destruction represented, so that the same curiosity that slows down drivers hungry to see the results of a motorway accident equally propels gallery visitors to pore over the wreckage and speculate about the fate of its occupant. It is highly probable that the driver was killed, judging from the egregious penetration by the bonnet into the space of the front seat, and also by the full reclination of that seat to allow the body to be resuscitated or removed (how much we know about such things!), yet that doesn’t close the door on the drama of the work.

In spite of its hulking presence in the gallery, the work’s material and colour endow it with an ethereal lightness that belies its massive physicality. The suggested spectre of death similarly pulls it into a realm of otherworldliness in which its baroque arabesques of twisted metal and mangled plastic miraculously align this most profane sculpture with religious art. Surveying the soft folds of crumpled door panels and undulating roof contours, my thoughts turned to Bernini’s The Ecstasy of St. Theresa (1645-52), a sculpture that makes monochromatic, grey-white marble look as if it could float heavenward in its exuberant evocation of drapery. St. Theresa was pierced by a flaming arrow, while the driver of the Pontiac was done in by a larger projectile, yet both, it can be assumed, were convinced that God would take them to a better place. In the case of the latter-day saint, a ‘Jesus is Lord’ plaque mounted on the lid of the car’s boot serves as a wholly plausible proclamation of contemporary faith.

Contemporaneity is key in Ray’s work, for connections to the myths and beliefs of the present give it an urgency that is only enriched by art historical associations. The car wreck, in particular, is an entirely modern event that has played a major role in works by figures such as Warhol, Godard, Ballard, Cronenberg and Chamberlain, all of whom have explored its power, beauty, tragedy and banality to varying degrees. The list of cultural luminaries immortalised by their automotive deaths is even longer, from Jackson Pollock to James Dean, Princess Grace to Princess Di, and brings enough combined romanticism and longing to the genre to make suicide seem a second-rate route to iconicity. Ray has likewise immortalised himself with a deadly car crash, making the best work of his career, yet in his case, living to talk about it may be less a blessing than an unexpected curse. How will he ever top this?
Michael Darling
http://www.frieze.com/issue/review/charles_ray/

Did you consider choosing the most recommended Bitcoin exchange company - Coinbase.

Claim free satoshis from Easy Bitcoin Faucet. Up to 33 satoshis every 10 minutes.

Have you ever tried automating your free satoshi claims by using a BTC FAUCET ROTATOR?

Follow our signals right now & profit up to 270% daily.

If you are trying to buy bitcoins online, Paxful is the #1 source for bitcoins as it allows buying bitcoins by 100's of different payment methods, such as MoneyGram, Western Union, PayPal, Visa, MasterCard, American Express and even exchanging your gift cards for bitcoins.

Join 1,000,000's who have already discovered smarter methods for investing in Ripple...

Learn from profitable eToro traders or copy their positions automatically