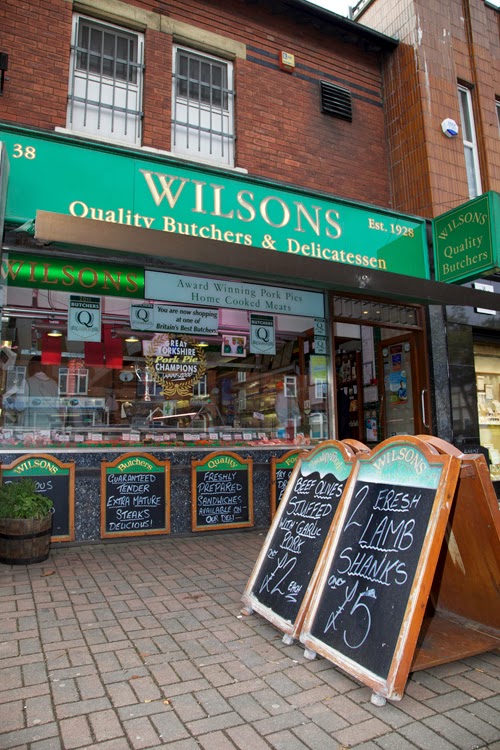 Wilsons, winners of “Britain’s Best Butchers (2012-2013) are award winning traditional butchers who cater for the requirements of today’s conscientious consumer. They achieve this by sourcing only the finest locally produced beef, outdoor reared pork and Yorkshire lamb which is matured and cut by master craftsmen to give tender, succulent meat with real flavour. Wilsons are also noted for their home made sausage and Champion Pies & Pasties, being three times winners of the Yorkshire Small Pork Pie Competition. They even make 10 inch celebration pork pies for special occasions as well as a three tier wedding pork pie. Wilsons also have an online shop with deliveries direct to your door – you won’t be disappointed!
http://www.qguild.co.uk/your-local-butcher/west-yorkshire/wilsons-of-crossgates/ 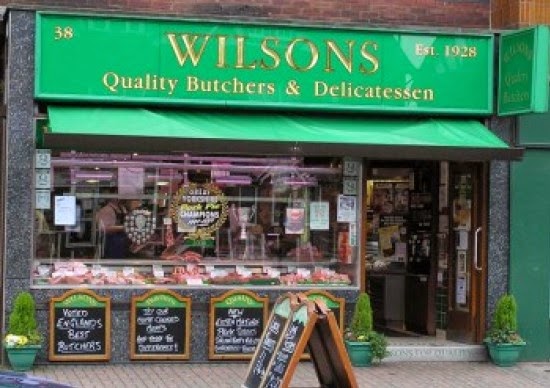 Now, being an East Leeds lad, I always assumed that the finest growlers were from Wilsons of Crossgates (and Morley). They are championship winners after all and (according to the sign) have featured on the Terry Wogan show.
raveydavey
http://www.secretleeds.co.uk/forum/Messages.aspx?ThreadID=1821

Wilsons success in the competition also achieved widespread publicity in local and regional newspaper and broadcast media, including personal appearances for the owners, brothers Andrew and John Green, on both BBC Look North and YTV Calendar.

Mind you, the duo were quick to take up the initiative, personally delivering batches of their championship pies to the media, who were highly appreciative of the gesture.

John explains: “We have also had enquiries from further afield. A cafe from Wakefield wanted us to deliver, while a man from Liverpool who works near Skipton asked us to post him some of our award winning pies.

“Winning The Pork Pie Appreciation Society competition has certainly boosted our profile considerably  and our sales!

It was third time lucky in 2005 for Wilsons Butchers, based in Austhorpe Road , Crossgates, who had finished runners up in the competition for the previous two years.

Fourth generation butchers, Andrew and John Green, have made remarkable progress since taking over at in Crossgates in 1985. Expansion, diversification and a true commitment to their chosen trade, backed by a skilled and experienced team both in the shop and behind the scenes, have seen Wilsons become one of the best known and most successful butchers in the whole region.

Andrew Green recalls: “In the early days, we operated as a specialist meat shop, before opening an in house bakery and introducing our own home made pies. We haven’t looked back since. The bakery has grown since day one and is going forward all the time.”
http://www.porkpieclub.com/index.php/pork-pie-history/31-wilsons-success-is-not-pie-in-the-sky.html

Start following our signals today and profit up to 270% daily.