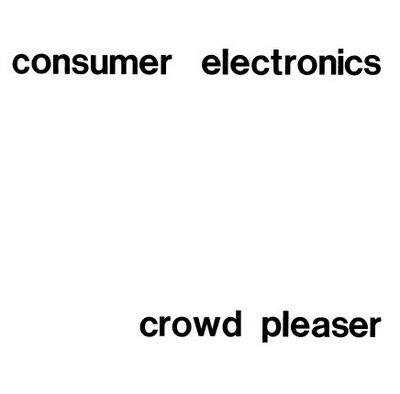 Following the end of Whitehouse it's clear there's been a polarisation between Philip Best and William Bennett's subsequent solo projects. From the last album Racket the contents seem to have been split fairly evenly. William gets custody of the pounding percussion for his Afro noise project while Philip gets to keep the hectoring vocals that deliver withering poetic put-downs with a near cartoon-like intensity. Both sides of the amicable split have returned stronger than ever, maybe benefiting from a focus on these individual elements of what made Whitehouse such a potent cocktail. Crowd Pleaser is a short, bracing blast, four tracks on one side, a single instrumental on the other. The noise itself is generally a series of somber mid-range tones feeding back on themselves, quite an abstract backing for Best's excoriating lyrical delivery. As with Whitehouse, the accusations and rebukes pile up into a wall of rage, individual phrases striking out with particular savage humour. "Staring at the blank TV/ Surrounded by videos/ You could just tell were in the wrong boxes" comes to mind immediately. A handy lyrics sheet is a useful reference should the words ever disappear into the mass of pure sound. This is something that rarely happens thanks to some careful production, leaving each element for the most part audible, keeping a delicate balance between light and shade. Like the stark black and white of the album's packaging, it does its work in the extremes.