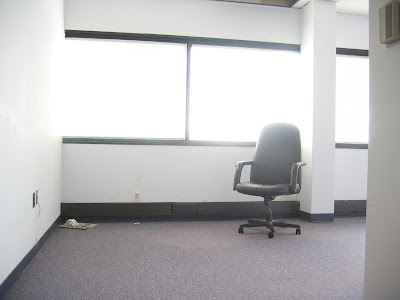 A pretty, dark-haired actress in a business suit is standing amid a maze of desks, talking to the camera and expertly gesturing. The occupants are seemingly oblivious to her presence. At the end of the video the actress smartly crosses her arms over her chest, fixes a stern expression on her face, and utters the corporate motto which introduced the video as a title (‘Think Again’). As she continues to stare into the camera the scene around her begins to change: shadows drift about the maze of desks and the faces of all the employees become rotten and corroded, as if they are being afflicted with leprosy in fast motion. One by one they rise from their desks and succumb to the strange fidgety conniptions of a danse macabre. Under the stress of these fitful, brittle movements their limbs break off and fall to the floor, where the shadows move in to devour them. Noses and ears quickly wither, lips peel back to reveal broken teeth, eyeballs shrivel in their sockets. The pretty, dark-haired actress continues to stare into the camera with a stern expression.
Posted by _Black_Acrylic at 20:56