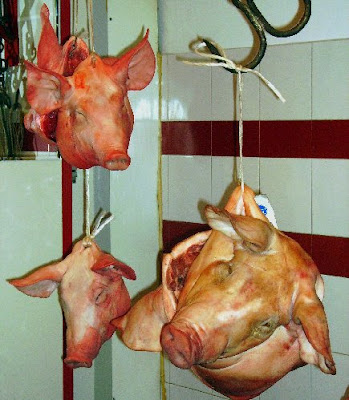 Extract from Thomas Ligotti, My Work Is Not Yet Done:

That would seem to have been the end of it. I never suspected that I was going to be put to further use. I never suspected that there was a grander – if not exactly ‘grand’ scheme of things. Not for a moment did I consider that I would continue to be manipulated and conspired against… that I would become the instrument of greater manipulations and conspiracies, all the while being kept in the dark about what was really going on, about what should have been the real subject of my Ultimate Statement, as I now attempt to deliver it to you, not one of whom will ever benefit from it. People do not know, and cannot face, the things that go on in this world, the secret nightmares that are suffered by millions every day… and the excruciating paradox, the nightmarish obscenity of being something that does not know what it is and yet believes that it does know, something that in fact is nothing but a tiny particle that forms the body of The Great Black Swine Which Wallows in a Great River of Blackness that to us looks like sunrises and skyscrapers, like all the knotted events of the past and the unravelling of these knots in the future, like birthdays and funerals, like satellites and cell phones and rockets launched into space, like nations and peoples, like the laws of nature and the laws of humanity, like families and friends, like everything, including these words that I write. Because this document, this supposedly Ultimate Statement, is only the record of incidents destined for the garbage can of the incredible. And rightly so. These incidents are essentially no different from any others in the world: they occurred in a particular sequence, they were witnessed and sometimes documented, but in the end they have no significance, no sense, no meaning, at least as I – and you and you and you – imagine these vacuous concepts.
Posted by _Black_Acrylic at 10:09