Dance Mania: Chicago house label that also released a great deal of ghetto/booty house beginning in the early 1990s. One of the more important labels related to ghettohouse.
Rate Your Music 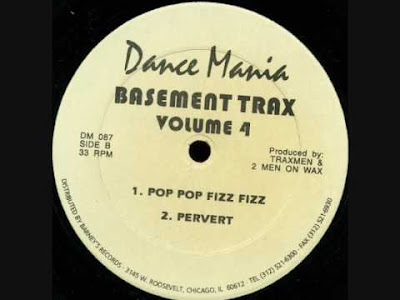 Wikipedia: Dance Mania is a Chicago record label founded by Jesse Saunders in 1985. Jesse conveyed Dance Mania in 1986 to Raymond Barney when he left for Los Angeles. It released many house music and acid house records in the 80s and early 90s and defined the ghetto house sound in 1994 and 1995. DJ Funk (who was already producer for the label) bought it in 2005 and made a new release (#1001). This first new EP since 2001, Pop Dat Thang, is a medley and reprise of DJ Funk's old tracks.
http://en.wikipedia.org/wiki/Dance_Mania

Discogs profile: A CHICAGO label that was founded by Jesse Saunders in 1985. Jesse conveyed Dance Mania in 1986 to Raymond Barney when he left for Los Angeles. Label became known for raw, percussive TRACKS from the very beginning. Early hits included Lil' Louis' 'Video Clash', 'How I Feel' , 'War Games' , '7 Ways' by Hercules, and perhaps the most known classic, 'Housenation' by House Master Boyz And The Rude Boy Of House, The in 1986. Ray's own company; Barney's records distributed many of the early Chi-labels, like G Strings, Chicago Underground, Warehouse Records (2), etc.. In the period of 1992/93 Dance Mania began to release records from new the breed of Chicago artists, namely from the likes of: DJ Funk, Paul Johnson, Eric Martin, Traxmen, Parris Mitchell, DJ Deeon, DJ Milton and so on... Label returned to it's roots, to the dirty side of Disco that was always very popular in Chicago. In few years DM released somewhat 200 records, making the matrix number rise close to DM300. At the moment (feb-2001), there hasn't been much activity from the label. Future will show whether more releases can be expected...
http://www.discogs.com/label/Dance+Mania


this﻿ is not detroit techno...
this is straight jackin chicago warehouse beats. one of my all time favs.
dsemben

Over the last 20 years there has been a mutation within the Chicago and Detroit house scene. Our story begins with the birth of the Dance Mania label, started in 1985 by Jesse Saunders. The label quickly became known for its proto ghetto house sound, providing artists with a platform to release work that focused more on a raw, percussive and bass heavy sound. Early tracks such as The Browns ‘What’s That’ and House Master Boyz And The Rude Boy Of House – House Nation contained cut-up vocals and fast-paced drum work at the forefront of the tracks which became a huge influence upon the following wave of ghetto house. Early Dance Mania records were championed by many DJs such as Ron Hardy, whom himself was known to play a huge range of new and exciting records in the scene aswell as controversially playing records backwards!
futuresoundstemporary

If you don't know about it Dancemania is a label out of Chicago that started in the mid '80s with some pretty known anthems and artists. It wasn't till the early '90s when the more known names such as: DJ Funk, Paul Johnson, Dj Deeon, etc. were putting out heaters on DM, with ghetto and disco sounds. Within a few years the label put out more songs that you could download in one day off of hype machine. By 2001 they put out the DM 300!! Over 300 songs on a single independent label out of Chicago! Pretty cool if ya ask me?
Mad Decent - Mixcloud

Ruben Fleischer chats to some of the seminal Chicago label's main producers back in 1998, including appearances from Waxmaster, DJ Deeon, DJ Funk and Dance Mania owner Ray Barney.