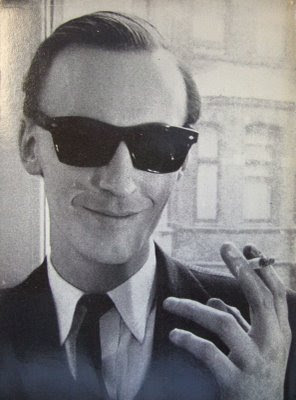 Extract from Derek Raymond, The Crust On Its Uppers:

Down to biz there'd never be any grassing. We'd never grass on each other even at the end of time, nor even long after time had run out, as it threatens to sometimes: we're not like the slag, who start grassing even before they've been whacked, soon as they get their collar felt - not even after a right punch-up from the law in a little granite room, not for a ten-stretch. Would you believe it, I think it's something to do with being gentlemen - the last relics of romance, which always looks a bit grubby close up like the Spanish Civil War or something - out with the flashing rapiers and all that Errol Flynn stuff. Anyway, it's kicks: Drake with his genes turned upside down, inside out; a new sort of Drake with pressure on him from all over the manor - pressure from the law, the income-tax boys, from the middle classes who hate us and the working classes, not to mention the oafos, the things who hate us . . . they all want to squeeze out the upper classes, strip us, put us out of our agony. We're supposed to be in an impossible situation nowadays, too useless to exist: products of our parents who live on the shreds of their inheritances like Marchmare's and mine do, and keep up a pointless front. But just because we've absorbed all that doesn't mean to say us morries are the same. Maybe we're a bit rotten (maybe: do you mind!) but we've still got our energy, brains, education - we're all dressed up and nowhere to go, and they've taxed us out of our loot, but we've got expensive tastes and we need the loot so out we go and get it. Mind, that's not to say I've got much sympathy for most of the ice-creams I was at school with, who keep on pretending that something that doesn't exist any more still does. Would you believe it? I've known squares I was at school with (prefects, monitors, scholarship-winners, all that crap) take jobs in INDUSTRY, as management trainees! Oh, morrie, do me a favour, will you? You know what that is? It's a formal death sentence. I don't say one or two of them don't make it, but oo! the convulsions! No, no, Marchmare, the Archbubble and I - we know we can't win, but we're going to make sure we don't lose. The game we play, it's got its risks, but it's a heady, intoxicating game; better than nine-to-fiving it and sex, cocktails and rows in a pseudo-tudo cottage near Sevenoaks. At least we're living. So life's a jungle. So it's a terrible thing.
Posted by _Black_Acrylic at 16:56