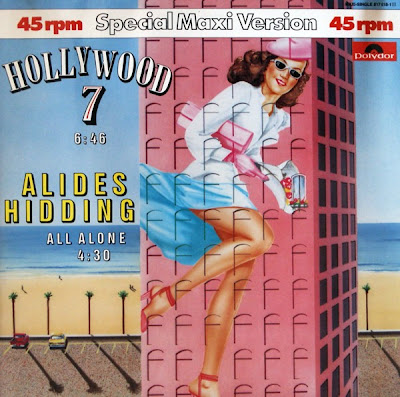 In 1974 Gloria Sklerov, a prolific songwriter who now specialises in wedding music, was asked to write an "urban story song" for Terry Jacks who needed a follow-up to the hit single Seasons in the Sun. "On the way home on the freeway one night I passed a motel called Hollywood Eight which intrigued me. I started to think about who might be checking in there. We decided to change the name to 'Hollywood Seven' because it 'sang' better. We then plotted the story and it all came out like it was meant to. Unfortunately the Terry Jacks deal fell though but we were thrilled when we heard the recording by Jon English. It used some of the synth riffs we had used in the demo and I was very proud of this version."

However it's the 1980 cover version of Hollywood Seven by Dutch singer Alides Hidding which has been "rescued from the depths of dollar bin obscurity" by DJs Mike Simonetti and Johnny Jewel. Recently released by Perseo Records (with other rare covers such as the German one with psychedelic guitar) Simonetti and Jewel's extended edit "clocks in at 6.51 and is mastered with extremely heavy drums."
http://aordisco.blogspot.com/2011/11/hollywood-seven-disconet-dilemma.html 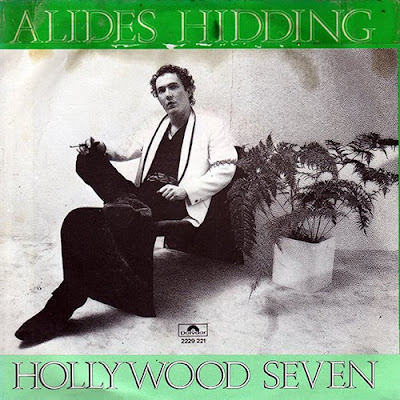 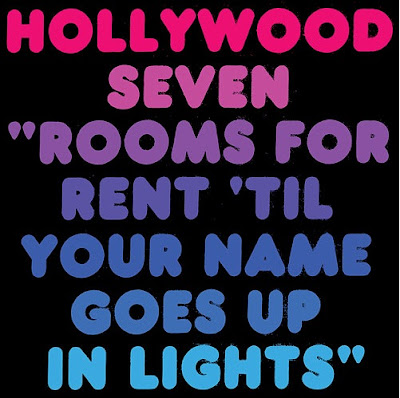 In 2008 Mike Simonetti & Johnny Jewel were in a record store in Perth, Australia killing time on tour when they found another version of the song while looking through crates of discount records. It was definitely fate! To find this song in the most random record store in the most remote city on the planet had to mean something. Mike spun it that night at an after party deep in the belly of a basement. The song had the classic feel of the original, but was more like a version performed by Neil Diamond's long lost Australian brother. Nine months later, Glass Candy had the night off in San Diego. Outside of a record store in an alley behind a pharmacy, Johnny stumbled across an even more bizarre interpretation of "Hollywood Seven." A strangely hi-NRG inspired version mixed with shredding psych guitar riffs and sung completely in German! In 2010 Nat Walker (Chromatics / Desire) found yet another version of "Hollywood Seven" at a North Portland church rummage sale while looking for hip hop samples. This piano-driven version was a glammy early 80s gospel private press record and is the only version known to contain the fourth verse (this is the original Jon English 1976 version).
http://www.piccadillyrecords.com/products/MikeSimonettiJohnnyJewel-HollywoodSevenEP-Perseo-77353.html

To be honest the press release for this 12-inch is so epic that the best thing to do would be just to quote it in full. With full record geek's enthusiasm it details the cratedigger's journey that befell Mike Simonetti and Johnny Jewel and lead them to no less than four versions of "Hollywood Seven." As a result, Simonetti and Jewel take the artist's slot on this one not only for their extended edit of the original track but for their digging chops in unearthing a little dusty, dollar-disco diamond. It seems like there's weird cover versions of this all over the world. One surfaced in Australia. Another at a North Portland rummage sale. Another, sung in German, was found by Jewel in San Diego, "outside of a record store in an alley behind a pharmacy," which is how you know these guys are hardcore: they are literally looking for records in the alley outside the record store.

The original, a lynchpin of the duo's lauded Albuterol mix, is an immensely catchy trash-disco delight, with over-the-top everything: urgent horns, handclaps, scratchy guitar, rousing melody and an unbeatable soap opera storyline that revels in the clichés of stardom dreams born and broken in California. With its brutal, near-ridiculous melodrama, I could imagine Rainer Fassbinder spinning it.

The cover versions are a cabinet of wonders, or hotel mini-bar of wonders, unto themselves. The German version plucks the riff from Clapton's "Layla," replaces the horns with bright-ass synths and retells the tale in Dietrich deadpan, suddenly conjuring not only smoky Berlin cabaret but traditional German schlager-schmaltz. The "Piano" and "Ballad" versions are close kin, both slowing the tempo and upping the pathos with that world-weary feeling you only get in overwrought '70s rock.
http://www.residentadvisor.net/review-view.aspx?id=9499