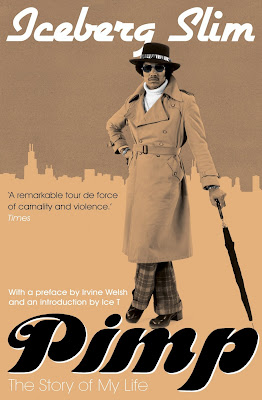 When I got back to Milwaukee, Mama and the street, my mind was straitjacketed into the pimp game. Back in the joint I had dreamed almost nightly. They were cruel playets.
They were fantastic. I would see myself gigantic and powerful like God Almighty. My clothes would glow. My underwear would be rainbow-hued silk petting my skin.
My suits were spun-gold shot through with precious stones. My shoes would be dazzling silver. The toes were as sharp as daggers. Beautiful whores with piteous eyes groveled at my feet.
Through the dream mist I would see shaped huge stakes. The whores' painted faces would be wild in fear. They would wail and beg me not to murder them on those sharp steel stakes.
I would laugh madly. Springs of scarlet would spurt from their behinds as I joyfully booted them crotch first onto the sharp spikes. They would flop around like dying chickens. They would finally fall away in a welter of blood into two red halves.
When I awoke my ticker would be earthquaking inside me. The hot volley of the savage thrill lay sticky wet between my trembling thighs.
I had other terrible dreams. I would be very tiny. A gargantuan Christ, in a sea of light, would be towering above me. In his anger his eyes would be blazing blue suns. His silky platinum hair would stand on end in his rage.
A shaft of the purest white light would shoot from the tip of his index finger. He would point toward a woman. Her back would be turned to me. He would hand me a barbed leather whip.
Like a crash of summer thunder he would command, 'Punish this evil woman. Destroy the devil inside her. The Lord so directs thee.'
Eagerly I would grab the heavy whip in both hands. I would bring it down with all my force on the woman's back. She would just stand there. The scarlet would drain down from her slashed back. She would be standing to her knees in a river of blood.
She would turn her brown agonized face toward me. It would be Mama. I would be shaking and screaming in my sweat. It was horrible. I could never cut the dream off until its end. It had to run its fearful course. The dreams about Mama came until her death.
Posted by _Black_Acrylic at 18:07