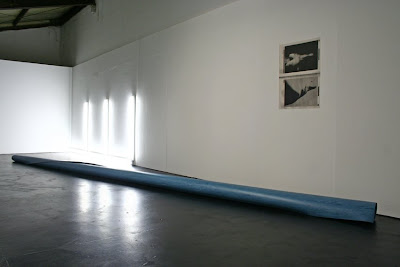 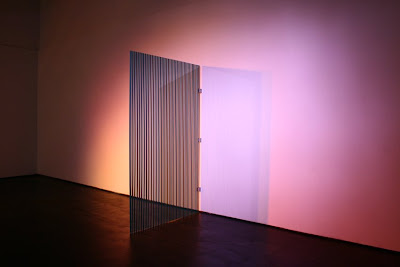 At the centre of George Henry Longly’s show Mass Damper, in the middle of a darkened gallery, a snake eats a mouse on an endless loop. The DVD is shot on a wobbly camcorder YouTube-style as a young boy’s voice resounds throughout the space, his words sounding eerily calm as he matter-of-factly describes the brutal power plays acted out all across the natural world’s order of things. On the monitor immediately below it, another python struts around its cage gaping its enormous mouth before retiring indoors to its hut. These sounds and visions find echoes across the two rooms and their collected objects, serving to create a disquieting aura around everything while making the usual ingrained gallery-going experience appear suddenly strange and unfamiliar. An orange lamp in the first room’s corner appears as a doppelganger on the video screen, its glow reflected also in the laminated mirror glass of the High Victorian screen opposite. Meanwhile the room next door is bathed in the light of white florescent tubes. The ‘mass damper’ of the exhibition’s title is a component within a building’s structure designed to absorb external vibrations, motion and noise, and the individual elements within the exhibition seem designed to create a barely perceptible tension between one another. Throughout the show Longly has shown a great sensitivity to texture, combining works in cement, silkscreen prints, concrete, plaster and the fluorescent tubes. Describing the show’s schedule, the artist states that every stop on the itinerary for this touring exhibition has been deemed site-specific, every install being subject to change according to the venue’s architecture and geographical location. Through the careful selection and balance of individual components you’re left to ponder how the exhibition space has been negotiated and how, like a mouse to a snake, the artwork has been consumed.
Posted by _Black_Acrylic at 13:25