A Brief History of Art and Chaos Magic: The Life and Work of Austin Osman Spare 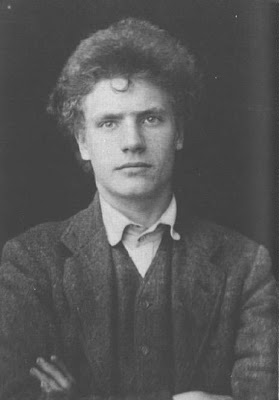 Austin Osman Spare was an artist who would come to be defined by his inner life as a visionary, magician and sorcerer. Achieving his greatest material success in the years leading up to the First World War, his work was never wholly accepted or understood by the metropolitan art elite. Today however, a few recent exhibitions and biographies have reawakened the public’s interest in this elusive and idiosyncratic figure. His automatic drawing techniques anticipated the surrealists, while his writings on magic have been studied by occultists ever since they were first committed to the page. Spare’s career is said to have run in reverse, beginning with scholarships and artworld celebrity, before finally ending in a shabby Brixton basement surrounded by stray cats. But whatever his status at any given time, Spare has never entirely disappeared from the radar of consensus reality.

Born in 1886, the son of a London policeman, he was something of an Edwardian artworld celebrity in his youth. At the age of seventeen he exhibited at the Royal Academy and won a scholarship to the Royal College of Art. An article in The Daily Chronicle from 1904 would catch him in the first full bloom of inspiration, while his mother claimed his talent was already evident at the age of four:

“All day long he would have a pencil in his hand, drawing anything that was placed before him - his parents, his sisters, or brothers. Nothing seemed to come amiss and we made up our minds that if it was at all possible he should be allowed to follow what was evidently his vocation. Of course it has been expensive to buy his board and paints, and all else that he requires, for, curiously enough, he can never be persuaded to sell any of his work. He is even averse to showing it to anyone.”

This reluctance to sell his work would remain consistent throughout his life. Self-analysis and self-discovery were always more of a priority. To The Chronicle’s journalist he was already confiding his thoughts on religion:

"I have practically none. I go anywhere. This life is but a reasonable development. All faiths are to me the same. I go to the Church in which I was born — the Established — but without the slightest faith. In fact, I am devising a religion of my own which embodies my conception of what we were, are, and shall be in the future."

Spare’s art is characterized by an extraordinarily high standard of draughtsmanship, a heavily stylized flowing line that would draw comparisons with Aubrey Beardsley. Like Beardsley before him, Spare was attracted to grotesqueries and much of his graphic work is populated by demons, satyrs, gods and monsters. He edited a number of arts magazines including Form - A Quarterly Of The Arts from 1916 to 1922 and The Golden Hind from 1922 to 1924. A 2001 Fortean Times article by Phil Baker makes the case for Spare’s artistic accomplishments:

“At best it is exceptionally powerful, but one of the most peculiar things about it is his chameleonic range of styles. Spare's distinct modes - some at different periods, others contemporary with each other - have been compared to Beardsley, Michelangelo, Dürer, and Blake, among others, but they have an intensity that goes beyond pastiche, with something unmistakably "Spare" about all of them.”

Spare also began to self-publish illustrated magical books from 1905, and from this point cultivated a reputation as an eccentric, marginal figure in cultural history. Meanwhile his standing as a magician would only increase. As Nevill Drury wrote in his 2000 article Austin Osman Spare: Divine Draughtsman:

“He nevertheless remains a legendary figure in the 20th century western esoteric tradition and is one of its truly original thinkers, his approach to trance states and his technique of atavistic resurgence representing a unique contribution to the study of magical consciousness.”

He was taught much of this by his neighbour Mrs. Paterson, whom he later claimed had the power to lasciviously transform herself from an aged crone to a sexually alluring woman. Through her he learned the technique of sigilisation, the use of drawing to concentrate the will and effect change in reality. Sigils are often simple graphic symbols whose form can be visualized and impressed upon the user’s subconscious mind. For the US writer and surrealist James Champagne, Spare would prove an inspiring figure:

"I most likely discovered Spare's work through the music of Coil, and became further interested in his life upon studying the teachings of Kenneth Grant, whose books and articles written in the 1970s all but saved Spare from fading into obscurity. Spare created a personalized, stripped-down, and ritual-free form of magical practice that I find highly creative and inspirational (especially his technique for creating and powering sigils, which I myself have employed to interesting effects), and in this regard he can be seen as a spiritual precursor for the chaos magic movement: many of the seemingly modern cutting-edge ideas that can be found in Peter J. Carroll's seminal "Liber Null & Psychonaut" are re-worked versions of Spare's own techniques."

During his many years of obscurity, Spare’s memory was kept alive by a gaggle of occultists and members of the rockstar aristocracy. Collectors have included the Led Zeppelin guitarist Jimmy Page, the filmmaker Kenneth Anger and the Throbbing Gristle frontperson Genesis P. Orridge. A minor resurgence of interest has followed in the past year, with Phil Baker releasing his biography Austin Spare: The Life and Legend of London’s Lost Artist. A solo show was held at the Cuming Museum in south London, and a documentary film is said to be in production. After a century spent on the periphery or hiding in the shadows, could it be time for Austin Osman Spare’s star to rise once again?
Posted by _Black_Acrylic at 22:51