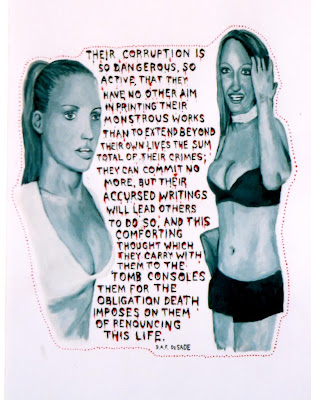 
Extract from Andrea Dworkin - Feminism, Art, and My Mother Sylvia:

What characterizes masculinist art, and the men who make it, is misogyny--and in the face of that misogyny, someone had better reinvent integrity.

They, the masculinists, have told us that they write about the human condition, that their themes are the great themes-- love, death, heroism, suffering, history itself. They have told us that our themes--love, death, heroism, suffering, history itself--are trivial because we are, by our very nature, trivial.

I renounce masculinist art. It is not art which illuminates the human condition--it illuminates only, and to men's final and everlasting shame, the masculinist world--and as we look around us, that world is not one to be proud of. Masculinist art, the art of centuries of men, is not universal, or the final explication of what being in the world is. It is, in the end, descriptive only of a world in which women are subjugated, submissive, enslaved, robbed of full becoming, distinguished only by carnality, demeaned. I say, my life is not trivial; my sensibility is not trivial; my struggle is not trivial. Nor was my mother's, or her mother's before her. I renounce those who hate women, who have contempt for women, who ridicule and demean women, and when I do, I renounce most of the art, masculinist art, ever made.
Posted by _Black_Acrylic at 23:18

congratulations!! for your position!! I´m lokking for real art that make councisness of what is being a man in this time!!