A CUT A SCRATCH A SCORE @ Duncan of Jordanstone 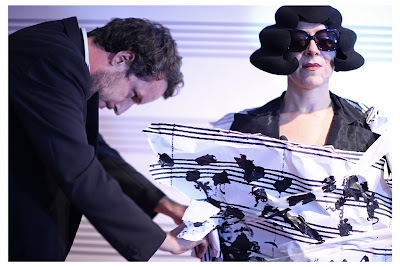 An ambitious multimedia project taking place at various sites across Dundee, A CUT A SCRATCH A SCORE can hardly be faulted for a lack of ambition. Described by Duncan of Jordanstone Exhibitions as being “a comic opera in three parts”, the venture incorporates opera, comedy, drawings, sculpture and moving images, and will “act as a stage for the city and its people”. Open rehearsals took place last week in the art college’s Cooper Gallery, as well as two offsite locations: City Square and the Botanic Gardens, with a team of resident writers responding to and reflecting on the process on a blog. I caught up with Beth Savage, dramaturge, who has been working with artists Sam Belinfante, David Barnett, Bruce McLean and Adeline Bourret to ask a few questions:

The Skinny has no opera section. What part of the magazine should this go in?

I think you would have to invent a whole new section for this. Do you have an “undefined” section?

Describe A CUT A SCRATCH A SCORE to our readers.

The project started with a weeklong series of live events and discussions which will be followed by an exhibition both in the Cooper Gallery Dundee and then later in the RCA London.
It combines elements from opera, literature and visual art to create a stage on which to examine the notions of comedy, music and art within society.
It takes inspiration from Dundee’s comic industry and adopts the archetypes, such as the gentle giant and the mischief-maker, characters which we are all familiar with, and uses them to ‘score’ the ups and downs of modern life.
The project also approaches subjects such as collaboration and hierarchy in art. It aims to create a true collaboration between the artists and the city and to reject traditional conventions of a hierarchical system allowing each of the contributors to the project to have a sense of ownership and authorship of the work.
There were various open rehearsals and salons with the artists and writers as well as forums such as the blog in which those who attended the week’s events could have their say and continue the discussions which came up. I hope these will continue throughout the exhibition period as they opened up some very interesting discussions surrounding the ideas behind the work and the project has only just begun.

Did you, or any of the other artists and writers, have any opera
experience?

Lore Lixenberg is of course an amazing opera singer and Sam Belinfante has a very strong classical music background which has greatly informed the work. Bruce Mclean and David Barnett have also worked with various theatre projects during their careers.

Was there much scope for adapting the work as the week went on? Was there any room for improvisation?

The Open Rehearsals acted as a space for both experimentation and inspiration. For example I was writing the libretto live as the events unfolded, this was then the basic starting point for the following rehearsals and Culminating Performance. A lot of what happened on the night was subject to change and much of it was improvised.

How do you hope to engage the city’s residents with this project?

By taking to the streets and involving local projects such as the Dundee Drum Academy, and the choir and singers from Dundee there will be a certain amount of public participation and authorship. When making live art in a public space there are always these amazing incidents caused by people’s reactions which really enrich the experience. It changes the way people move through or use the space for the duration of the performance, sometimes even longer. Also by opening up the project to the public through the Open Rehearsals and Salons there is a chance for people to experience aspects of making the work which might otherwise have been hidden and perhaps even to influence the work through the discussion.

http://www.exhibitions.dundee.ac.uk/acut.html
Posted by _Black_Acrylic at 23:22