Peter Sotos (born April 17, 1960) is an American writer and musician. In his books, Sotos examines sadistic sexual criminals and sexually violent pornography, particularly involving children. His writings are interpreted by some as commenting on media hypocrisy around these issues. His books are often first person narratives, taking on the point of view of the sexual predator in order to explore sadistic and pedophilic sexual impulses. 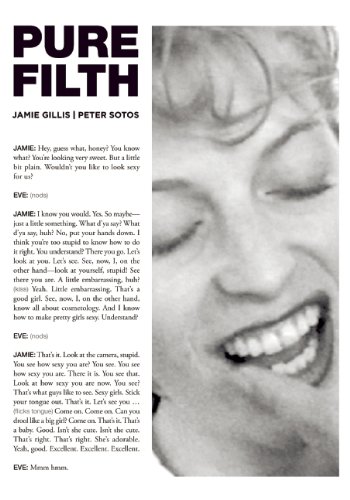 Jamie Gillis appeared in over one hundred films, and as such was a primary performer in pornography’s “Golden Age.” Gillis is also known for inventing the “Gonzo” genre of pornography, played out in the film Boogie Nights by Burt Reynolds’ character.

Pure Filth appears as transcripts from the films Jamie produced during these early years of radical and highly personal pornography. Completed just before his death in February 2010, Gillis contributed an introduction to each transcript to shed light on his ideas and plans, as well as anecdotal details and personal commentary. The book has more to do with an artist’s understanding of sex than the mere views of a flesh peddler. The careful language and brutal intelligence that Jamie brought to interviews are what separates the conversations from any other work that might have more academic or prurient pretensions.

Extreme novelist Peter Sotos, perhaps better known and appreciated in France and the United Kingdom than his home country, was a good friend of Jamie Gillis, and Sotos’ unusual perspective makes this volume possible.
http://feralhouse.com/pure-filth/ While Sotos’s most recent work, Pure Filth, seems tame compared to his earlier work, it offers a glimpse into his universe without the extremities of the illegal and grotesque. Pure Filth takes as its subject the gonzo films of porn star Jamie Gillis, whose enterprise was adapted into the scenes in Boogie Nights where Burt Reynolds takes Heather Graham out on the town in a limo to have real sex with strangers on tape. As it turns out, P.T. Anderson’s version of Gillis’s series “On The Prowl” is well beyond tamed down. The actual videos feature Gilis leading a series of hired escorts into backseats and dirty bookstores and hotel rooms to take part in whatever kind of debauchery the men they encountered wish to subject them to. Gillis would direct the scene via a constant stream of taunts, slurs, jeers, and encouragements, which frequently ended with Gillis joining in himself. The films feature golden showers, analingus, physical violence, and a general sense of degradation of the females even as they willingly, and in seeming pleasure, take their part.

Pure Filth is, simply, Sotos’s transcriptions of the dialogue that occurred in selected bits from Gillis’s films. The text provides little-to-no actual dictation of what is happening in the video; at most, we receive minimal parenthetical notations such as: (ass to back) or (piss). As readers, then, we are left without visuals that might have given some kind of context to the scene, which somehow builds an even more relentless, blank-faced wall of hell. By stripping the ongoings down to only language, the reader’s mind is forced to bear the brunt of the images itself, filling in the white feed of the paper with a kind of what I can only describe as sick ambient sound. Early on in the series this equates to a ridiculous and well-known skronk, such as “Oh. Yes. Yes. Oh honey, where’d you get those panties? Where’d you get those panties? Oh. Oh. Let me see more panties—those panties, where’d you get those, Jesus. Beautiful.” As the book goes on though, and as Gillis’s enterprises continue to knock down their own walls, it turns to something more unsettling: “Is that dog shit? Dog shit? Is that dog shit? Look at yourself. Come on, you know what you are. Who’s a fucking whore? Huh?” The book becomes more and more inductive to a neutered kind of violence, which somehow in its 2D hold sticks even more, if in a way that holds fully still.
Blake Butler
http://www.vice.com/read/the-putrid-voyeurisms-of-peter-sotos-1

I have just installed iStripper, and now I can watch the sexiest virtual strippers on my desktop.

If you need your ex-girlfriend or ex-boyfriend to come crawling back to you on their knees (even if they're dating somebody else now) you have to watch this video
right away...