Although some critics such as Frances Richard dismissed him as a "throwback to Surrealism or Agitprop at worst" other critics, such as Mary Flanagan have seen his use of games as constituting examples of critical play.
http://en.wikipedia.org/wiki/%C3%96yvind_Fahlstr%C3%B6m 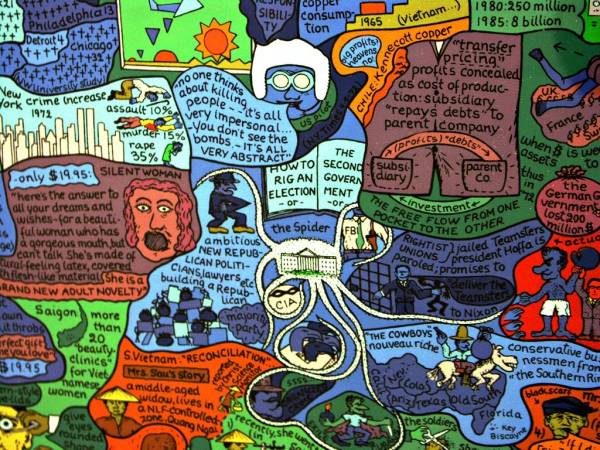 With images based on jigsaw puzzles, dollar bills, and pie charts throughout, it`s easy to see why Fahlstrom`s work gets lumped under the rubric of Pop. But he doesn`t really belong there. Notes 6 (Nixon`s Dreams), 1974, for instance, shows a blue-faced, insomniac Tricky Dick counting panthers jumping over a police barrier and an electrified map of South Vietnam lying on a catafalque surrounded by gold bullion. Notes 7 ("Gook"-masks), 1971-75, a handcolored etching, depicts Smokey Bear, Angela Davis, Uncle Sam, of course, and personifications of Hiroshima and South Africa. What American Pop-ist would base an entire composition on snatches of poetry by Sylvia Plath (Sixteen Elements from "Chile I," 1976/89), or include in a dense, rollicking silkscreen a request addressed "Dear Picasso" that the artist remove Guernica from MOMA until the United States withdraw from Southeast Asia (Column no. 2 [Picasso 90], 1973)?

Fahlstrom`s relative lack of critical lionization is belied by the fame of some of Pop`s abject, punk-rock offspring whose work was prefigured in his-among them Raymond Pettibon, Matthew Ritchie, Carroll Dunham, and Mike Kelley. In fact, any contemporary artist who mixes words with pictures, sociocultural reference with dreamlike personal form, or writing and performance with painterly and graphic production is, to a certain degree, Fahlstrom`s inheritor. There`s little about this artist that isn`t, still, en avant.

Indeed, like the late Mark Lombardi, whose post-Conceptual depictions of political and financial malfeasance bear a distinct relation to this very body of work, Fahlstrom is an artist one wishes were here to comment now: Guernica, rejected by the UN in February 2003 as a too-embarrassing backdrop for a press conference on Iraq, has again become symbolic in the struggle against a crypto-imperialist US-led war, while the problem of creating effective agitprop that maintains aesthetic independence is, of course, perennial.
Frances Richard
http://www.mutualart.com/OpenArticle/Oyvind-Fahlstrom/12CD1BFCFB5F2215 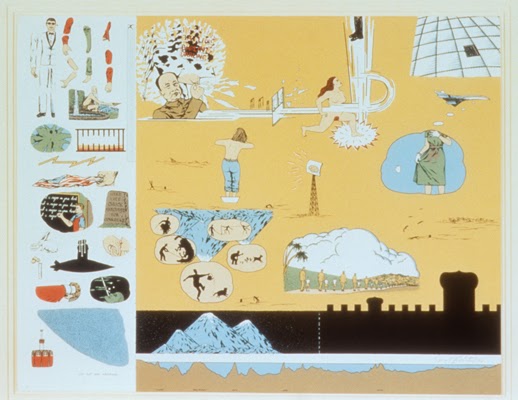 His art was a stew of references, half-submerged allusions, enthusiasms and conversations, both with the living and the dead. It is difficult to see how, precisely, he got from A to B, from a fascination with Antonin Artaud (whom he translated) and Marquis de Sade to AA Milne's Winnie the Pooh, or from championing an American comic book artist like Robert Crumb, to producing an installation of shiny, flat metal cut-outs derived from the forms in Crumb's cartoons. And from here to his interactive artworks based on the Monopoly game, to his gorgeous annotated maps and to his final works, with their moveable elements (if nothing else, Fahlstrom's work is a precursor to the fridge magnet), and their pointy, bulbous, extruded, blunted, somehow nasty, Miro-esque forms.

Fahlstrom's sketchbooks and notes are, throughout, wonderful jams of words, diagrams, fanciful machines, pictographs, petri-dish dictionaries, highly wrought but unreadable hieroglyphs, lists and graphic explosions. I dare any commentator to untangle their logic, but perhaps that doesn't matter. Their fertility is the thing. While his drawings and private notations show Fahlstrom's thought in flight, his early paintings are just clogged, agglutinative and somewhat dead layers of formal and linguistic material.

Fahlstrom was in essence a graphic artist. His enthusiasm for comic-book illustration and cartoon strips as well as his interest in Matta (a terrible painter who could have been a great comic-book artist) serve to highlight where Fahlstrom's own talents really lay.
Adrian Searle
http://www.theguardian.com/artanddesign/2002/oct/01/art.artsfeatures

What really separates Fahlstrom from most American Pop artists is the literary underpinning of his work. His art is less concerned with showing than with talking. Its origins, in fact, are primarily in concrete poetry, for which he wrote a manifesto in 1953. No wonder he was captivated early on by the work of Giuseppe Capogrossi, the Italian artist whose paintings consisted of swarming iterations of a single highly variable letterlike character. Writing and drawing existed on a continuum for Fahlstrom, with innumerable intermediate varieties and no inherent contradiction. (Maybe that's why he never saw formal exuberance and referential specificity as antithetical.) Similarly, he recognized no essential distinction between work in two and three dimensions, or between a painting on the one hand and a board game with movable pieces magnetically attached to their wall-mounted support on the other. Such "variable paintings," probably his best-knownwork, engaged him from Babies for Africa, 1963, through Night Music 4: Protein Race Scenario (Words by Trakl, Lorca, Plath, and Pietri), realized in 1976, the year of his death.

And yet Fahlstrom's art was not as protean, as infinitely permutable as he may have wanted it to be. In particular--and in contrast to the brilliant use of photographic imagery by the equally adept draftsman Warhol--whenever Fahlstrom stepped away from that drawing/writing continuum and yielded to the temptation to use the neutral gaze of photography, his work loses energy, looks dated. (I am thinking, notably, of The Little General (Pinball Machine), 1967, with its flotilla of pictorial elements drifting freely on a pool of water.) His subject matter extended to the grand scale of geopolitical events (essentially a new form of history painting) and, though his political aspirations are less interesting than his anxieties and even paranoia, to utopian desires for humanity at large, as in the installation Garden--A World Model, 1973. But its embodiment was always entrusted to the eccentric immediacies of the hand, the insubordinate divagations of a line that had more than a little affinity with Surrealist automatism, as shown, for instance, in the studies that make up 20 Improvisations (for Chile 2), 1973-74. Such forms, as incorporated into Fahlstrom's more elaborate compositions, could be deliberately athwart their constative meaning. Their intricacy, as the artist himself once observed, "may have something of the surprising beauty of tropical fish."
Barry Schwabsky
http://www.thefreelibrary.com/OYVIND+FAHLSTROM.-a075761320