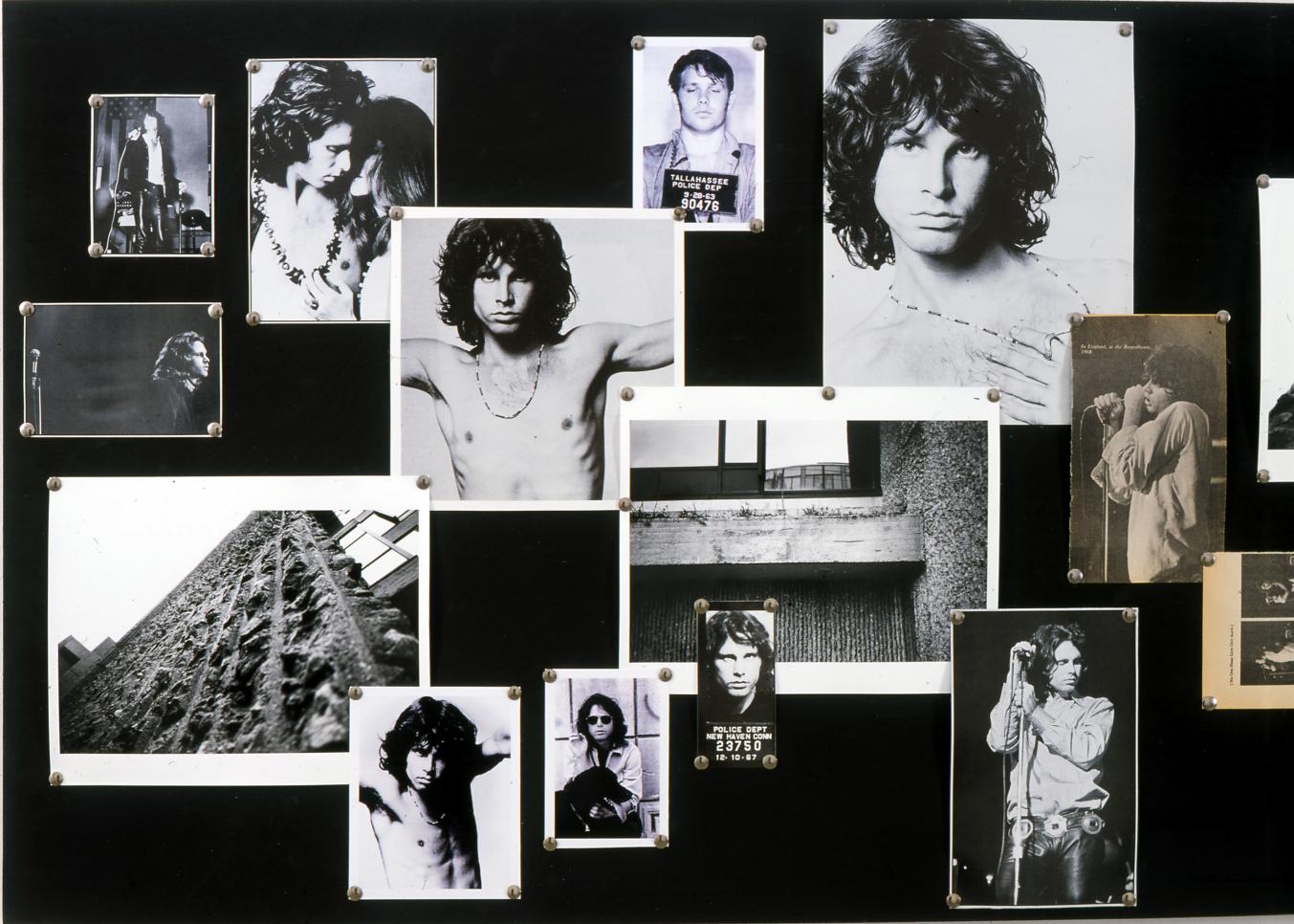 Tom Burr (born 1963) is an American conceptual artist, based in New York.

In the late 1990s Burr embarked on a body of work that remains ongoing; derived from the language and forms of both Tony Smith's sculptures, on the one hand, and closed architectural spaces such as bars, cages and boxes. These works, often borrowing Smith's matte black palate, evoke spaces of control and containment, as well as the "safe zones" of underground cultures.

Alongside these works, Burr developed his now iconic Bulletin Boards, originally created out of the excessive collecting of images and materials that are part of his working methods. Constructed through plays of juxtaposition, the boards are markers of place, often reflecting the situation of their exhibition.
http://en.wikipedia.org/wiki/Tom_Burr

Here, a collection of photographs layered black-and-white images of the Minimalist vocabulary and yet sinuous and mostly jet-black forms of Tony Smith alongside (and on top of, and beneath) stills from Kenneth Anger’s cult film, Scorpio Rising (1964) , with its ironic rock-and-roll send-up of 1950s American values, its youthful James Dean rebel-types polishing and rubbing their “Christmas tree versions of motorcycles” (to paraphrase Anger), with its fetishization of the black leather uniforms of biker culture, and its exaggerated overtones of homoeroticism, violence, and brutality. The incongruence of the pairing, of Tony Smith and Kenneth Anger, of deadpan Minimalism and parodic exaggeration, gave way under these image-conditions to an overarching work of correspondence, as the accumulation sought out visual rhymes between black sculptures and black leather jackets, polished Minimalist surfaces and the gleam of the boys’ bikes, the play of light off crisp sculptural facets and the bathing of beautiful male bodies in shadow, serial sculptures and the repetitive phallic pool cues or metal stools of the biker bar, esoteric geometries and the arcane symbols (including the Nazi swastika) of the bikers—between one form of sexiness, or one form of violence, or one form of fetishization, and another . The result is a contagion of meaning, in the wake of which none of the former valences of the objects in question will remain.

Such has been the work of most of Burr’s bulletin board projects. In Brutalist Bulletin Board (2001) , for example, various photographs of the corrugated, rough-hewn sur faces of that Minimalist variant of architecture known as Brutalism were grouped with and compared to the seductive and idolized “character” of the rock star Jim Morrison of The Doors. In a series of photographs worthy of the fanzine, we are shown Morrison posing, and laughing, and vamping for the camera. We see the star pulling sensuously on a cigarette, or staring vapidly, his plump lips at times half-open in the notorious Morrison scowl, or simply in toothy, empty, perhaps slightly stupid abandon. And the implication of the collection is that the Brutalist architecture, presented here in fetishistic pieces and image fragments like the body parts of Morrison, is doing all of these things, too: it is a pose, a vamp, a scowl, a per formance; it is empty, and vapid, and masculine, and seductive. Incongruity, in such works, arises from a potentially jarring historical com
George Baker
http://thepuritan.files.wordpress.com/2007/05/baker_burr.pdf

TIMOTHY HULL: You've used this appropriative physicality of photos in works like "Brutalist Bulletin Board  (2001), and so I am interested to hear your thoughts on the queer aesthetics of the brutalist style of  architecture.

BURR: The first time I worked with that imagery was for an early bulletin board that juxtaposed images of Jim Morrison with these Paul Rudolph buildings from my hometown of New Haven, which added a heightened sense of my own autobiography. It's important to have multiple parallel reasons to include something in your art so you can't be pinned down to any one. But the idea of Brutalism as an abject, ugly, and bulky architecture was appealing to me, because of its rebellion against conventions. There is a real subversive contradiction there because Brutalism became the dominant style of government and municipal architecture, yet it also had an erotic quality to it. I was interested in that contradiction; the latent adolescent rebellion of Brutalism.

HULL: This may sound like a left-field question... do you believe in ghosts and other psychic phenomenon? What is the nature or role of ghosts in your life or work?

BURR: Do I believe in ghosts? Well, I suppose this is a similar question to the one earlier on about modes of memory or history... because I think that ghosts do exist as buoyed by a collective memory or consciousness regarding a person or the idea of a person. Our desire for lingering essences of people is enormously powerful and can certainly take on the trappings of a phenomenological experience.
http://www.artinamericamagazine.com/news-features/interviews/tom-burr/

By sexualizing institutional critique Burr’s work reveals the waste and luxury of any spectacle. His work makes available the sexualized zone of seeing anywhere at all ­ the body existing liminally between sex/not-sex, which is the inescapable, spectacular, mutating instantiation of seeing/being seen. His work should be considered in relation to the sparse erotic environment of Calvin Klein’s John Pawson-designed flagship store, the situational burdens of Paul Reubens, and the dizzying contradictions of Travis, as much as in relation to Minimalist sculpture (Tony Smith and Richard Serra), institutional critique, and the allegorical site (Robert Smithson). Burr allows all these things to be the commentaries and reflections of one another. Call it Brutalist in that it necessitates a confrontation between different registers of cultural discourse.

‘Brutalism’ was the title of Burr’s most recent show at Galerie Neu, Berlin. It built upon previous work: Black Box (1998), which broke down a plywood black box into four corners, using a mirror for one of the sides, and providing a ledge, bar height, upon which were placed black ashtrays; Black Bulletin Board (1998), which juxtaposed stills from Kenneth Anger’s Scorpio Rising (1964) with pictures of work by Tony Smith and photos of a dark, butch bar; Black Pavilions (1999), black plywood garden pavilion mock-ups; and his discrete photographic study, Palm Beach Views (1998), of four and a half metre ficus hedges in Palm Beach, Florida, ‘through which only extremely rare, and potentially criminal glimpses into private gardens were possible’. ‘Brutalism’ centred around Quartered (2001) where the black box, divided into four Goth cubes, generated a black boxing ring. Bringing his interest in site mobility to a new level, the entire structure was poised on rolling wheels. Instead of biker boys, bars, and Smith, there were two black bulletin boards with photos of architectural works situated in New Haven, Connecticut (Burr’s place of birth, and the academic residence of architect Paul Rudolph, Brutalism’s paterfamilias). Insinuated darkly among these structures glowered photos of Jim Morrison (as Burr wrote for the press release) ‘... posing, dancing, and being arrested on stage in the New Haven Coliseum ... for verbally assaulting a police officer who accused Morrison of making a public sexual display with his girlfriend ... further secur[ing] his arrest by chanting ‘fuck the police’ on stage during the concert and encouraging the audience to accompany him.’ Two of a suite of six black ‘chairs or chair-like forms’ in wood with cushions of black vinyl completed the exhibition’s decor, providing ‘the anti-brutal with heavy residual traces of repressed brutality’.

The paths taken to expedite the transactions of desire have environmental consequences, an ecology. The landscape design term for such shortcuts is ‘desire lines’. Burr is tracking such lines.
Bruce Hainley
http://www.frieze.com/issue/article/black_box_recorder/

If you need your ex-girlfriend or ex-boyfriend to come crawling back to you on their knees (no matter why you broke up) you need to watch this video
right away...

There is shocking news in the sports betting industry.

It's been said that every bettor needs to look at this,

Watch this or stop betting on sports...

Get professional trading signals delivered to your cell phone every day.