Sex was a boutique run by Malcolm McLaren and Vivienne Westwood at 430 King's Road, London between 1974 and 1976. It specialized in clothing that defined the look of the punk movement.

The façade included a 4 ft sign of 4 ft pink foam rubber letters spelling “SEX”. The interior was covered with graffiti from the SCUM Manifesto and chickenwire. Rubber curtains covered the walls and red carpeting was installed.

The store's designs confronted social and sexual taboos, and included T-shirts bearing images of the Cambridge Rapist's face hood, semi-naked cowboys from a 1969 illustration by the US artist Jim French, a trompe-l'œil image of bare breasts from a novelty shirt first produced by Rhode Island School Of Art students Janusz and Laura Gottwald in the late 1960s, and pornographic texts from the book School for Wives by the beat author Alexander Trocchi. Also featured were T-shirts with the slogan 'Prick Up Your Ears', a reference to the biography of influential proto-punk subversive Joe Orton. The T-shirts also featured text culled from the biography of Orton stating how cheap clothes suited him. Among the designs were clear plastic-pocketed jeans, zippered tops and the Anarchy shirt which used stock from the 1960s manufacturer Wemblex. These were bleached and dyed shirts and adorned with silk Karl Marx patches and anarchist slogans.
http://en.wikipedia.org/wiki/Sex_(boutique)

McLaren & Westwood’s SEX boutique on King’s Road in Chelsea started out in ’71 as a small record shop where McLaren and a friend peddled vinyl, magazines and rock memorabilia.   It soon grew into Let It Rock– a hip “Teddy Boy” shop that sold used, as well as new fashions (designed by Malcolm’s school teacher gal-pal Westwood), that soon became all the rage for their creepers & pegged pants.  It changed fashion direction in ’72 and was renamed Too Fast To Live, Too Young To Die until 1974, when it once again got a facelift.

Christened with 4 ft. tall hot pink foam letters mounted directly to the graffiti-covered storefront spelling-out the new shop’s namesake– SEX carried innovative and provocative fashions designed by Vivienne Westwood, as well as authentic bondage & fetish gear– creating a look called Punk. The list of names that frequented and/or worked at SEX reads like a “who’s who” of early Punk Rock history.  Punk now had a name, a sound, and finally– an official shop, which would soon spawn imitators (BOY) ready to cash-in.
JP
http://selvedgeyard.com/2010/10/07/the-filth-the-fashion-vivienne-westwoods-70s-sex-rag-revolution/

McLaren renamed the shop Sex and he scrawled above the door 'Craft must have clothes but Truth loves to go naked'. The interior was sprayed with pornographic graffiti, hung with rubber curtains and stocked with sex and fetish wear.

Marco Pirroni, of the group Adam and the Ants, recalled: 'The country was a morass of beige and cream Bri-Nylon and their shop was an oasis. It took great liberalism and bravery to wear rubber in the street. If you shopped there, you didn't go anywhere else.' Westwood saw a kind of loveliness in this forbidden clothing: 'All the clothes I wore people would regard as shocking, I wore them because I just thought that I looked like a princess from another planet.'

Sex was intimidating and it attracted an extraordinary clientele, with voyeurs and prostitutes mixing with proto-Punk King's Road shoppers. Jordan, the shop assistant, was even more extraordinary. She wore rubber clothes, a beehive hairstyle and theatrical make-up. On her daily commute from Sussex, British Rail put Jordan in a first-class compartment for her own protection.
http://www.vam.ac.uk/content/articles/v/vivienne-westwood-designs/ 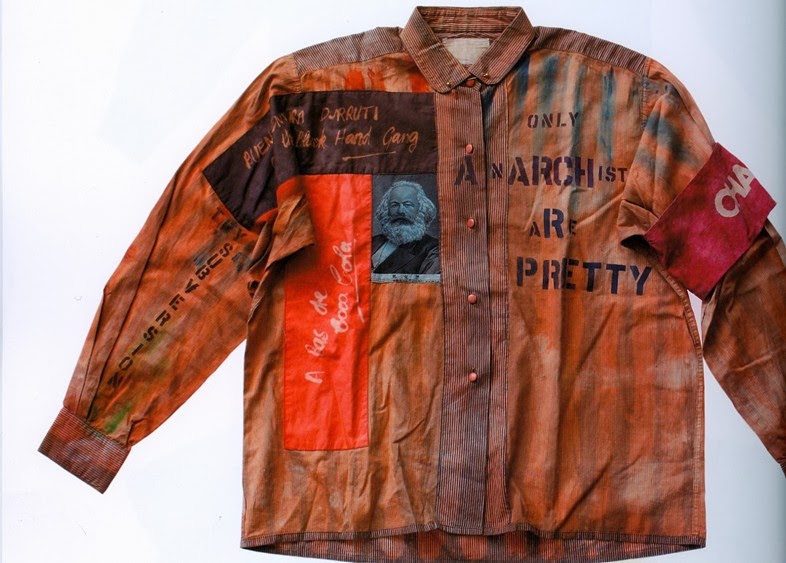 One of the most satisfying avenues I have been exploring over recent years is the picking apart and study of the extraordinary artworks, environments and garments Malcolm McLaren created down the years, in clothing often in tandem with Vivienne Westwood for their boutique at 430 King’s Road in World’s End, Chelsea. It is commonly held that these designs – the provocative t-shirts which now define the visual language of punk, for example – are beyond fashion, more akin to multiples, art pieces produced in limited number which belong behind frames, hanged on living room walls and held in museum collections. With primary source information from McLaren himself, I was helped in my investigation into the multifarious strands which fed into the creation in the summer of 1976 of McLaren and Westwood’s so-called Anarchy Shirt by Derek Harris of Lewis Leathers, who has an abiding interest in the activities of the 60s/70s radical activists the Situationist International.

In line with other creators of manifestos, McLaren was interested in juxtaposition. “Around that time I would stop by the store operated by 60s singer Chris Farlowe in Upper Street, Islington,” he said.  “He sold German and Nazi artifacts from the war. I was intrigued by the SS wedding rings and a number of patches and emblems. I purchased a lot and put some of them – such as an upturned Nazi eagle – with the Karl Marx patches on the shirts.”

Derek Harris believes the phrase “Only anarchists are pretty “ was a response to the statement “Of course, all the revolutionaries are pretty” - this appeared in a speech bubble in a 1971 comic circulated by the San Francisco-based Situationist cell Point-Blank!. Some Anarchy Shirts were also inscripted “The Black Hand Gang”, in reference to Spanish anarchists La Mano Negra, whose name was listed with that of their fellow countryman and revolutionary Buenaventura Durruti. “I simply dyed – not fast-dyed – pieces of material and, with a wooden twig dipped in Domestos bleach, wrote anarchic slogans that had appeared on the walls of Paris, such as ‘A Bas de Coca Cola’, an ode to anti-Americans, and to those great heroes of the anarchist movement such as Jose Buenaventura Durruti and the Black Hand Gang, famous in the Spanish Civil War.  “I had been a student and the anarchic European student movements really framed my critique,” McLaren told me. “This particular shirt celebrated that.”
Paul Gorman
http://www.dazeddigital.com/fashion/article/16066/1/the-anarchy-shirt

In her June 1976 interview for ‘Forum’ – then Britain’s best known sex magazine – Vivienne Westwood, always the more belligerent of the pair, claimed that ‘we really are making a political statement with this shop by attempting to attack the system’. High ambitions for a clothes shop, and dismissable except for the evidence: a riot of clothes that attempted to trash as many boundaries and taboos as possible. McLaren and Westwood were determined and tenacious: nothing and nobody was spared.

They had given warning. ‘Sex’ had been launched, to all intents and purposes, by the T-shirt ‘You’re gonna wake up one morning and know what side of the bed you’ve been lying on!’. Produced in collaboration with Bernard Rhodes – who bailed when he saw the content of some later ‘Sex’ T-shirts – this sartorial manifesto reproduced the oppositional format of Wyndham Lewis’ infamous “Blast”. In the ‘(Hates:)’ were the liberal media and the pop aristocracy of the day, while in the ‘(Loves:)’ were ‘Kutie Jones and the Sex Pistols’.

By 1976 and the heyday of ‘Sex’, McLaren and Westwood were moving on a series of broad fronts. Their ammunition included: scurrilous pop gossip (the untrue allegation that Brian Epstein died as a result of S&M practices), outrageous gay imagery (the black football player, the cowboys), expose items like the Cambridge Rapist T-shirt (which precipitated Rhodes’ exit) extremist politics (Marxist and Nazi imagery, situationist and ultra-feminist slogans), S&M and paedophilia (the smoking boy T-shirt that precipitated Rhodes’ exit).

Certainly, to enter ‘Sex’ in 1976 was an intimidating experience. As a Londoner, I was used to running the retail gauntlet: trying to buy dub albums in Shepherd’s Bush market or Wemblex shirts from Acme Attractions demanded a certain persistence. But Don Letts was, ultimately, fairly eager to please. No such accommodation from the ‘Sex’ crowd, whose hostility to the first time entrant prompted thoughts of a real S&M shop, where you went in to get beaten up by the assistants. Such was the masochism of Britain in 1976.

Encouraged by the success of the shop and the Sex Pistols’ rapid rise, ‘Seditionaries’ was the pluperfect incarnation of 430 Kings Road. The designs – the bondage suit, the muslin shirts, the parachute tops, the mohair sweaters – were a culmination of the pair’s thorough grounding in research and practical application. They were completely modern – so much so, that no couturier has yet surpassed them – yet worn out everyday by teenagers on the streets of Britain. Rarely has a pop cult been so well dressed.

The provocation had moved into a different phase. The best Seditionaries clothes did not need slogans or words to make their point: they just were. At the same time, the pair’s political polemics moved up a notch. Just as the Sex Pistols announced their arrival with “Anarchy in the UK”, the new shop gave pride of place to photographs of the shattered city of Dresden: the city flattened by Allied bombers in March 1945 within such a fiery holocaust that the controversy as to whether it was a strategic necessity or a war crime continues today.

However, just as the Sex Pistols reached their peak with the “God Save the Queen” single in the early summer of 1977, so did the shop begin to wear itself out. As Punk became mediated, it became more and more violent, both without and within: 430 was often besieged by Teds who felt that McLaren had pissed all over their sacred costume, while the shop’s position on the route to Chelsea football ground meant regular and extreme aggro. (This was before the dire sport/ music crossover that besets today’s popular culture).

The provocation was taken up. At the same time, as the children of punk began to swarm at World’s End, the shop’s elite status was eroded. It made an attempt to go more mainstream with a mail-order leaflet, but it was caught in the classic success trap: greater production meant abandoning to some degree the craft and exclusivity that had helped to make the clothes so outstanding. At the same time, its owners must have began to wonder whether, just like Frankenstein, exactly what their experiments had unleashed on the world.
Jon Savage
http://www.jonsavage.org/punk/430-kings-road/

Looking for the Ultimate Dating Site? Create an account and find your perfect date.

Do you prefer Coke or Pepsi?
ANSWER THE POLL and you could get a prepaid VISA gift card!

Follow our signals NOW and gain up to 270% per day.

If you want your ex-girlfriend or ex-boyfriend to come crawling back to you on their knees (no matter why you broke up) you have to watch this video
right away...

There is shocking news in the sports betting world.

Watch this now or quit placing bets on sports...