Hannah Höch (German: [hœç]; November 1, 1889 – May 31, 1978) was a German Dada artist. She is best known for her work of the Weimar period, when she was one of the originators of photomontage.
http://en.wikipedia.org/wiki/Hannah_H%C3%B6ch 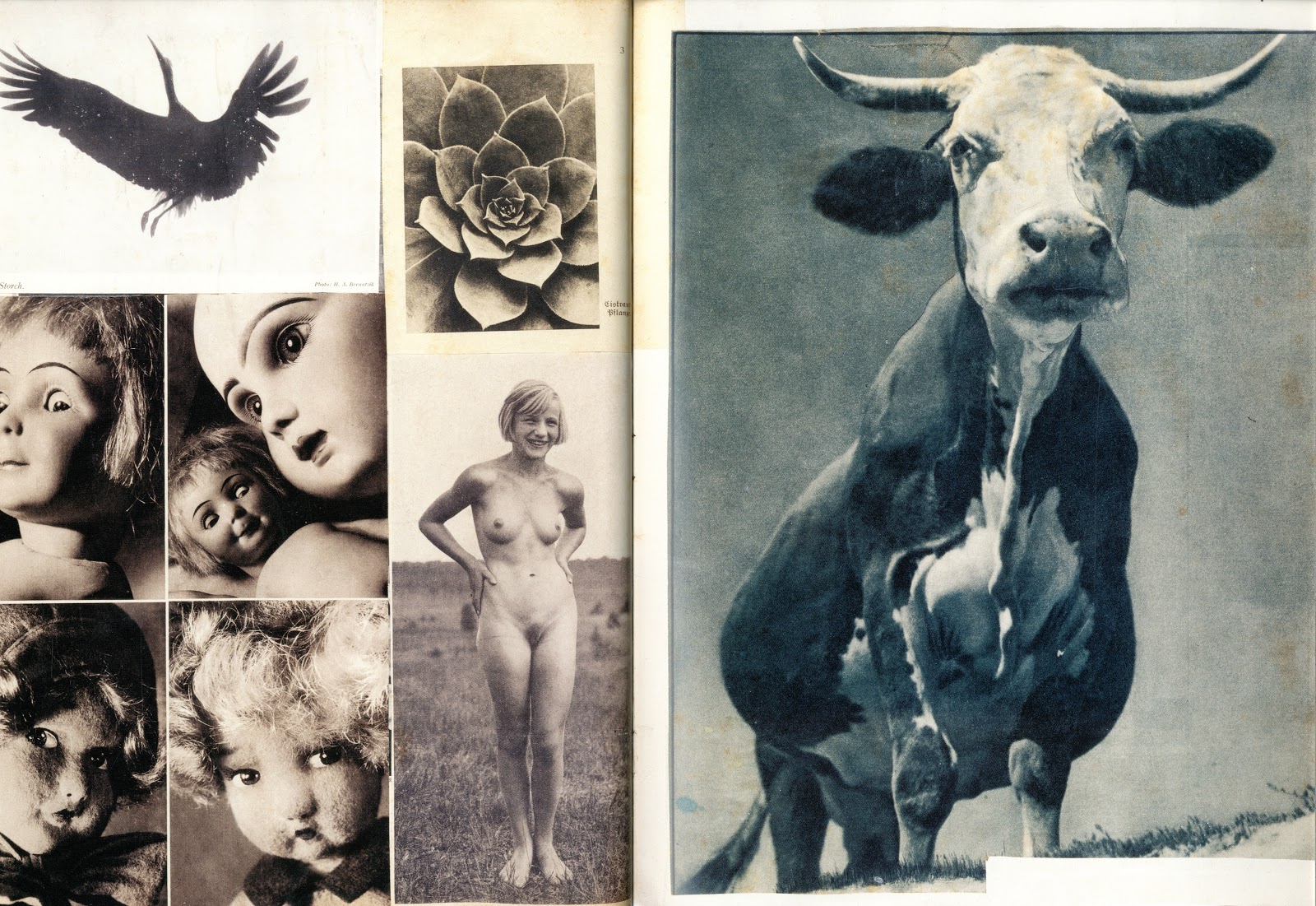 Höch's Album is a scrapbook of a little over 100 pages into which she pasted 421 photographs cut from magazines and newspapers. It is not an exercise in photomontage as such; almost all the images are intact, and the book's visual intensity is mostly a matter of how they collide and rhyme across double-page spreads. She borrows liberally from fashion photography, movie-star portraits, architectural studies and natural-history close-ups. The legs of dancers and naked gymnasts resemble nests of scaffolding and the spindly forms of Karl Blossfeldt's plant photographs; dogs and kittens stare soulfully like Hollywood starlets and pompous statesmen. It's been argued that the Album was a repository for motifs to be employed later in her photomontages, but the effect is actually of a fully achieved work, in which the forms and images of mass media meld and interlace into an exotic whole.
Brian Dillon
http://www.theguardian.com/artanddesign/2014/jan/09/hannah-hoch-art-punk-whitechapel Unlike many of her contemporaries, Höch stayed near Berlin between 1933 and 1945. Unable to exhibit, she began collating the Album – a change in her method, putting existing images together in a way that, shown here in a book, allows viewers to find meanings in their juxtaposition, rather than cutting fragments together to generate new works. Her interests in the New Woman and ethnography remain constant, but overt visual messages are resisted – unsurprisingly, given the conditions.
Juliet Jacques
http://www.newstatesman.com/juliet-jacques/2014/01/new-woman-berlins-feminist-dadaist-pioneer-hannah-h%C3%B6ch Her collages are like an analog version of a Tumblr blog!
Thombeau
http://strangeflowers.wordpress.com/2012/07/16/hannah-hoch-scrapbooks/ I checked out Hannah Höch's Album that she created in approximately 1933. It consists of 114 pages and contains over 400 photographic illustrations from periodicals. She liked images of female nudes, cats, and children as they are the most commonplace photographs. She liked cats so much, I scanned all the pages with them.

From Gunda Luyken's essay: “She created associative contexts which, knowing the circumstances of her life, permit of very impersonal interpretations. Beyond this, her album is marked by purposely introduced ‘disturbance factors.’ One such conscious accent, for instance, is the head of an emu, set on a double page otherwise devoted entirely to cats.”

In case you were wondering (because I was), Album contains 18 domestic cats.
j. russell
http://jacindarussellart.blogspot.co.uk/2011/05/hannah-hochs-album.html A major coup of the exhibition is ‘The Album’, a corridor dedicated to Höch’s 1934 ‘encyclopaedia of images’. Though not collages themselves, they document clippings from magazines of the era which appear later in her post-war work. This collection of ‘scrap books’ is an academic tool that bridges the development of her pre-war work, and her increasingly abstract post-World War Two work. Between clippings from Life Magazine and women’s titles from the period, a commentary on consumer lifestyle can be gleamed between beaming faces, advertisements (and the occasional cat).


It also marks a cut-off point in Höch’s personal and private life: as the Nazi party rapidly came to power through the 1930s, Höch retreated into isolation. By this point, her association with the Dada artists was largely over, but her work, increasingly gripped by politics and themes of exoticism, (some of her earlier collages explored images from colonial Africa, fixating on dancers), singled her out as a “cultural Bolshevik”. Marking the start of what Höch described as “12 terrible years”, her albums provide a private insight into how, despite her inability to exhibit, the germ of creativity remained as she documented the world around her.
Betty Wood
http://www.port-magazine.com/art-photography/hannah-hoch-at-the-whitechapel-gallery/

Follow our signals NOW and profit up to 270% per day.