The Other People Place - Lifestyles Of The Laptop Café 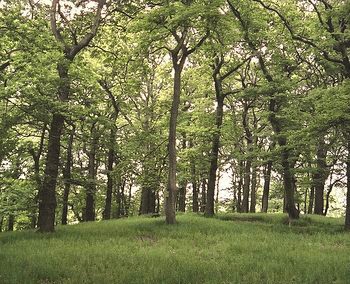 James Marcel Stinson (September 14, 1969 - September 3, 2002) was an electronic music producer from Detroit, Michigan. He is known for his contributions to electro and Detroit techno music. James Stinson grew up the east side of Detroit and graduated from Kettering University in Flint, Michigan in 1989. He was one of the two members of Drexciya from 1992 to 2002; he produced the last few albums on his own. He died of heart complications in 2002. At the time of his death he was married to Andrea Clementson-Stinson.
http://en.wikipedia.org/wiki/James_Stinson

It was long rumored (and later confirmed) that the anonymous producer behind the Other People Place guise is James Stinson, one half of Detroit electro geniuses Drexciya, but with the familiar jazzy tech-house rhythms that fill most of Lifestyles of the Laptop Café, it could be anyone with an ear for early Detroit techno. In fact, very much of the record sounds like the work of second-wave visionary Carl Craig. A sophisticated structure emerges from Lifestyles that is held up primarily with deep bass and warm synths. The rain-drenched, dark-street rhythms and liquidy chords that comprise the leadoff "Eye Contact" (and other standouts like "Moonlight Rendezvous and "It's Your Love) recall Derrick May's "Strings of Life" while carrying with them an entirely new theme. "Eye Contact is one such track that is spiced with soothing spoken lyrics intended to lampoon '90s culture (the male voice re-enacts a falling-in-love-from-across-the-room-whilst-sipping-a-latte situation; very '90s, indeed). Lifestyles is at least on par with any of the Detroit records of old, but where radio-friendly Inner City might have failed, Other People Place picks up, maintaining the high dance factor but with zero cheese factor. Detroit techno serves as a touchstone for Lifestyles, but this record is hardly a nostalgic throwback to those idealistic times. Instead, every track treats the music respectfully, pushing forward in a very new groove.
Ken Taylor
http://www.allmusic.com/album/lifestyles-of-the-laptop-cafe-mw0000591046 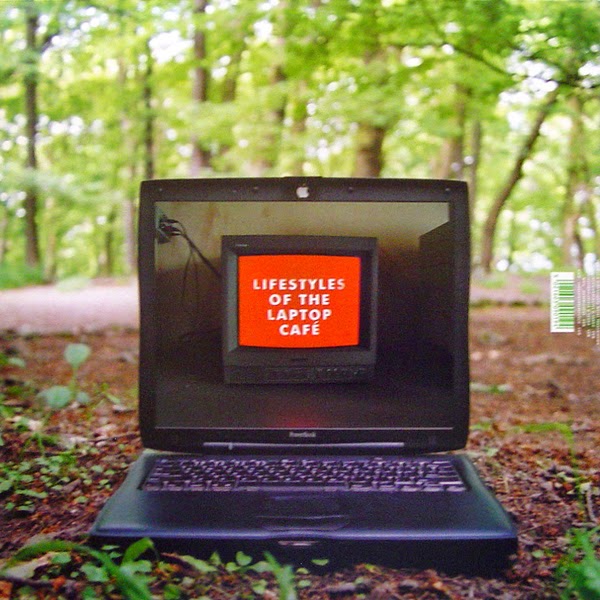 Electro for the 23rd century shopping mall crowd: While searching vainly for holiday deals on Hoverboards, customers retain only the vaguest awareness of the familiar 808 drums and analog synths, which combine to create a stimulating soundtrack to their outing. The mall proprietors are pleased.

“Was electro always this sweet-sounding?” a curious young girl asks her mother.

The girl is perceptive. By the Other People Places, Lifestyles of the Laptop Café effectively bridges the gap between funky old-school Detroit techno and the aesthetic of blissful atmospherics. Though it isn’t the first to do so, it is certainly one of the best examples. In terms of percussion and groove, the songs are very similar to the work of groups like Drexciya and Elektroids (membership likely overlaps), while the layering of non-percussive sound is much more reminiscent of Carl Craig or the Orb. While most electro aims to be sparse, the Other People Places fill in the gaps with rich, warm noise.

The warmth of the samples is the perfect complement to the classic depth of the grooves. “Moonlight Rendezvous” and “It’s Your Love” are perfect executions of this principle, striking a balance that defines the record. Then there are tracks like “Lifestyles of the Casual,” which could have been a Dopplereffekt song in another lifetime, and “Sunrays,” which is pretty and cosmic and ends the album on an unexpected note.

Lifestyles of the Laptop Café isn’t a record that will set the kids out in search of new software to achieve heretofore unheard sounds. Its brilliance isn’t in the newness of the equipment used to make it, but rather in the superior quality of the songwriting, the depth of the beats, and the inexplicable desire it generates for purchasing Hoverboards(tm). Regardless of who actually has their hands in the
Other People Place, the songs on this record are obviously the work of people who know their genre inside and out and can lay down groovy, nicely layered tracks with admirable consistency. See you in the future.
Ben Tausig
http://www.dustedmagazine.com/reviews/15 After long talks on the internet she finally agreed to meet in real life. Eye contact was made. A simple kiss exchanged deep emotions, awoke peace of mind, confusion and love. People on the streets noticed and looked in awe. It's your love. Impressed, in a different city a moonlight rendezvous occured. She said she want me. She said i know what i want.

Some days later the cavities of life reached out. Enough with that! Let me be what i wanna be. Suddenly she was gone. Was she running from his love? Gone? Back to earth, yet luckily there are the sunrays.

Project produced by James Stinson about a love born which prematurely ended. James died exactly one year after the release. Rest in peace my friend.
Ron242
http://www.discogs.com/Other-People-Place-Lifestyles-Of-The-Laptop-Caf%C3%A9/master/5383 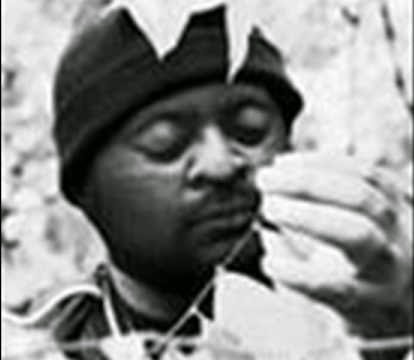 There are eight gorgeous slow paced tracks on this album, six with vocals. Due to the lyrics this the most direct Storm yet, with no confusion about the sentiments of the tracks. Love and possibly lust are what makes this record tick. The only exception being ‘Let Me Be Me’ which appears more broadly philosophical in nature with the repeated vocal loop of ‘Let me be what I want to be.’ I think this is also my favourite track, such a simple statement which could be directed at parents, lovers, anyone in authority over us. I think it may also be the central piece of the album which connects to the previous storm as it echo’s similar sentiments on the Transllusion album about finding your true self.

The longest vocal is on the opener ‘Eye Contact’, “What do we have here? Wow! Something's happening to my transmitters, starting to over load., sitting here in this cafe drinking my latte. Something's happening to me. What do I see on the other side of the room? My my, hmm that's what, my, she’s gorgeous. So let me slide over, transmission, communication sent.” It sounds like he might have sent her a wireless infra red message or did he really slide over and talk? The following track, ‘It’s Your Love’, has a vocal loop of “It’s your love that’s keeping me sorry” which gives some emotional balance. ‘Moonlight Rendezvous’ is instrumental but the title references the lyrics of 'Running From Love’, “ I’m a fugitive in the moonlight just running from your love”. Maybe the instrumental soundtracks what happens when he stops running? The idea of running from love might be to ask why we are afraid or unwilling to give in to those emotions. It could be another reference to how modern society is growing ever more complicated, so much so that we would prefer to resist something as precious as love. Although love can still break your heart without any interference from outside.

The first appearance of what seems like a female vocal appears on ‘You Said You Want Me’. The woman asks that question to be answered by the male “You know I do.” I guess with technology this might not even be a woman singing, but I would like to think that it is, something else we‘ll never know. In fact there is an obvious question here about the male vocalist. Is this Stinson or Donald, if either. I would plum for it being Stinson, only because it just doesn’t sound like Donald but we’ll never know unless we’re told. Another female vocal, presumably the same person/effect, is on the closing ‘Sunrays’. Another standout track on an album full of them. The lyrics loop the phrase “Relax your mind, slowly unwind, catch some rays of the sunshine.” Sublime and so simple. Not a love song, more a chill out/simplify message which does chime in with the whole getting back to nature concept.
‘Lifestyles of the Casual’ is another instrumental and a bit of a mystery. I guess as it’s so close to the album title it may mean we can refer to the inhabitants of the Other People Place as Casuals, but this might be taking it too literally. It could mean the lifestyle of accepting casual occurrences also, but that is really just another literal interpretation.

Love and the awakening of an inner life could certainly be described as a storm and fits in well with the concept so far.

There is one other release by The Other People Place that I want to consider, even though it came out a year later and on a different label. Sometime in 2002 Clone released the 12" 'Sunday Night Live at the Laptop Cafe'. This was the first time Clone hooked up with Drexciya and they went on to build a strong relationship with the band culminating with their Grava 4 swansong and continuing into today with Der Zyklus. Of course to add more confusion this is actually The Other People Place featuring Mystic Tribe a.i. First of all the producer of Mystic Tribe is Sherard Ingram who is a respected producer in his own right. He must have been a close friend of Drexciya as he is also their Drexciyen DJ Stingray. The mesmerising and very ‘Lifestyles’ sounding ‘Sorrow & a Cup of Joe’ is credited to TOPP while ‘Telepathic Seduction’ is down as written and produced by Mystic Tribe a.i. The artwork presents a mock handwritten poster on the window of what looks suspiciously like the Clone record shop. It reads, ‘performing at midnight The Other People Place’ and ‘special guest Mystic Tribe A.I. will be performing at 2am’. Maybe this release is more oddity than anything, only linked to the 3rd Storm by its titles. But as Stinson himself said of storms, that they can be pretty chaotic, a piece of debris like this flying off should come as no surprise in this context.

I suppose to sum up in very broad strokes where we have got to with the interpretation of the series would be wise at this point.

‘Harnessed The Storm’ is the violent scene setter that tells us that all is not well but ends on a note of hope of a new kind of life.

‘The Opening of the Cerebral Gate’ is when things start to become clear, it is the first real step in the Storm towards this new life. We learn to look within and explore our mental dimensions.

‘Lifestyles of the Laptop Cafe’ tells us to continue this process of finding our true selves but also to develop/retain basic human emotions, especially love and not to become a victim of the coldness of technology/modern society.
STEPHEN
http://www.drexciyaresearchlab.blogspot.co.uk/2005/08/other-people-place.html

Did you know you can shorten your urls with Shortest and make money for every click on your short links.

It's been said that any bettor must watch this,

Watch this now or quit placing bets on sports...

Follow our signals today and gain up to 270% per day.