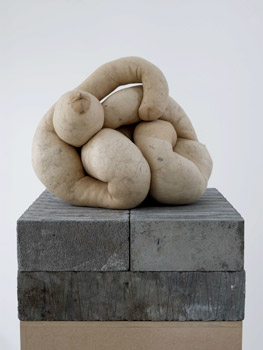 Sarah Lucas (born 1962) is an English artist. She is part of the generation of Young British Artists who emerged during the 1990s. Her works frequently employ visual puns and bawdy humour, and include photography, collage and found objects.
http://en.wikipedia.org/wiki/Sarah_Lucas

In 2009 Sarah Lucas starts NUDS, a series of new works, sculptures where stuffed tights on plinths of concrete breeze blocks assume polymorphic shapes. Recently, casted in bronze, NUDS have gone beyond representation to become pure, polished, shining forms. Suggestions of, allusions to limbs of female and male bodies embrace entwined, entangled, breasts and genitalia melt one into the other in the eternal fight between Eros and Thanatos. The third gallery at Whitechapel, which opens with Self-Portrait, 2000, outlined in cigarettes on brown paper, shows in all their sculpted, elegant morphism, the cast bronzes NUDS 2013 like Nduda, Realidad, Hoolian, Nahuiollin. 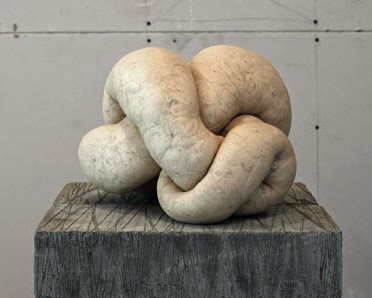 With her series of "NUDS" sculptures, begun in 2009, Lucas heightened her work's abstraction. Each features stockings stuffed with foam on a cinder-block plinth. The forms are twisted, like balloon sculptures, to evoke tangles of swollen limbs, the gatherings in the fabric their orifices. The stockings hark back to an early sculpture included here, Bunny Gets Snookered #1 (1997), which straightforwardly represents a nude made out of stockings draped over a chair. The "NUDS" sculptures, however, deliteralize this impulse, introducing a Brancusi-esque indirectness. They make one feel unwantedly, unspecifically illicit. A series of recent versions substitute the stuffed stockings with bronze casts of them, highlighting the Brancusi allusion while sacrificing the fertile associations arising from the mottled fleshy surfaces of the stockings. The polished bronze connotes "figure sculpture" before we have assimilated the abstraction of the form.
Mark Prince
http://www.artinamericamagazine.com/reviews/sarah-lucas/

Rail: Talk a bit about the Nuds Cycladic show that you did at the Museum of Cycladic Art. I know it kind of grew out of your bunny sculptures and developed into this sort of human form.

Lucas: I suppose it’s obvious to say they developed out of the bunnies because they use the same materials. But in a strange way they developed out of Penetralia. That was the next thing to come along. There is something very organic and branchy and sprite-like about them. You start making something, and it suddenly jumps to life and it seems so clear that you can’t believe you didn’t see that years ago. I mean, there is no reason why I shouldn’t have done something like that immediately after doing the bunnies. I do tend to jump around from one thing to another just for my own amusement. I like the change of materials. Enough fluff up your nose for so long and then you start to think, “Actually, I wouldn’t mind dealing with something else for a bit.” So that’s one thing. But I think it also just depends how you have your point of view adjusted at any particular moment. I really think that having it adjusted into these trees, and the “branchiness,” and the organic things, lead me to notice that about the Nuds. The first Nud was actually just a screwed up old bunny that had been in the back of a cupboard for some years. When I went through the cupboard and came across it, I suddenly saw something in it that I hadn’t seen when I screwed it up.

Rail: How did the bunnies come about to begin with?

Lucas: The first bunny, actually a hare, was started around the time I had this shop. I decided to make a kind of the Tortoise and the Hare sculpture, which actually never worked out, so I abandoned it. I stuffed the tights to try and make a kind of hare’s legs—it does look a bit like a hare’s legs—and at the time it was stuffed with newspaper. There was something about those legs. I never worked out the tortoise bit and I just thought it was a bloody silly idea anyway, but there was something intriguing about the life-likeness of those legs, so I put them on a top shelf in my kitchen at the time. When I returned to it some years later I wasn’t thinking of the tortoise and the hare; I don’t know what I was actually thinking of, but I remembered the sexiness of these legs. Only this time I decided to stuff them with fluffy cotton. It was when I stood back and looked at them around a chair that I thought, “There’s something so going on here.” So it developed out of that, really.
http://www.brooklynrail.org/2011/09/art/sarah-lucas-with-william-corwin

Get all your favorite spirits and wines on Duty Free Depot!