Marlene McCarty has worked across various media since the 1980s. She was a member of the AIDS activist collective Gran Fury and was the co-founder of the transdisciplinary design studio Bureau along with Donald Moffett. Using everyday materials such as graphite, ballpoint pen, and highlighter, McCarty probes issues ranging from sexual and social formation to parricide and infanticide. A major survey exhibition of her work, organized by Michael Cohen, was presented in 2010 at New York University's 80WSE galley. Her work is in the collection of major institutions including MoMA, the Brooklyn Museum and MoCA Los Angles.
http://www.sikkemajenkinsco.com/index.php?v=artist&artist=4eece299cfd37 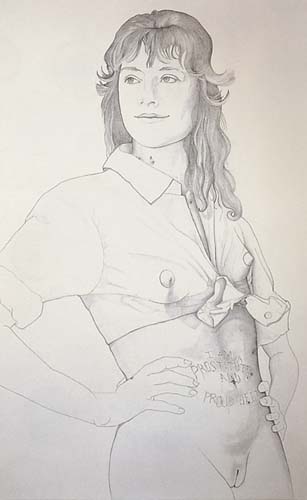 I first saw Marlene McCarty’s artwork in the late 90s. She made a series of huge portraits of teenage girls who had killed their mothers, accompanied by captions describing the murders in grisly detail. The girls were drawn painstakingly with no. 2 pencils and cheap ballpoint pens—the tools of a kid doodling in a notebook in class—and their clothing was see-through, which made them look ghostly and simultaneously menacing and vulnerable. They were tragic monsters.

Marlene’s drawings have since evolved to include a whole bevy of murderers: teen girls who killed their whole families, groups of girls who killed a friend, Christian evangelists who killed their children (because God told them to), as well as a creepily sexual series of children and families praying and, most recently, a series about the bonding between female scientists and the apes they study (also sexual).
Amy Kellner
http://www.vice.com/en_uk/read/the-90s-were-intense-592-v17n11 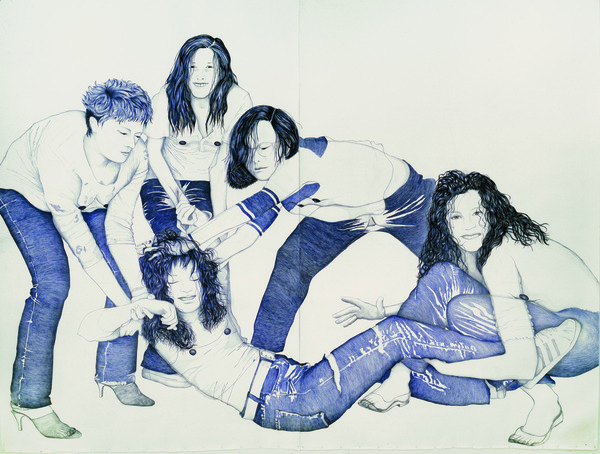 In the late 1990s artist Marlene McCarty made a series of drawings entitled "Murder Girls." The drawings were of young women who figured in terrible crimes and showed their sexual parts exposed and emphasized, to suggest a link between their budding sexuality and the crimes. In this series, McCarty drew females who had committed murder, with one exception: Sylvia Likens. In her case, she drew Sylvia, not Gertrude or Paula or any other female involved in harming Sylvia.

McCarty's drawing of Sylvia did not portray her malnourished but looking healthy and pretty, her hair long and wavy, a smile on her face. She was depicted in only a short blouse tied between her breasts and has her hands on her hips. Naked below the shirt, the words "I'M A PROSTITUTE AND PROUD OF IT!" are written on her stomach. The combination of happy expression, jaunty posture and stigmatizing words make the drawing extremely disturbing.

Writer Cathy Lebowitz extensively interviewed psychoanalyst and writer Josefina Ayerza about McCarty's "Murder Girls." After noting that Sylvia is the only victim drawn in the collection, Ayerza speculates, "There could be sexual frustration in Gertrude. And now she projects this frustration on the girl, while accusing her of being a prostitute. Gertrude hated the girl, still she could have been sexually aroused by her. What she certainly was is aroused to kill."

Lebowitz asks the psychoanalyst if she believes Gertrude was psychotic. "Not necessarily," Ayerza replies. "Just envy can draw someone into delusion. Say Gertrude was attracted to Sylvia and didn't really know it. Every time she looks at the girl her gaze is ready to bring up the sexual features from underneath the clothes. That is already a reason to panic. Thus, it affects her to a point that she has to kill her, and then torture the dead body ... possess it."
Denise Noe
http://www.crimelibrary.com/notorious_murders/young/likens/sylvia-in-marlene-mccartys-murder-girls.html

Ana Finel Honigman: Your choice of Bic pens as the medium for "Murder Girls" is reminiscent of school supplies. A few critics have noted that these drawings resemble adolescents' painstaking classroom doodles. Were you creating them as an alter-ego? When making them, were you imagining yourself as an adolescent girl – maybe heroizing her deviant peers and making a self portrait?

MMC: Here’s how it happened: my choice of materials was informed by my fantasy of how I thought the girls themselves would like to draw and/or see themselves drawn. I started researching the project before I ever suspected that I would do drawings. I had been doing a lot of artwork by creating large decals and then ironing them onto canvas. I just assumed I’d take the pictures I found and iron them onto canvas as well. I did in fact do a couple like that of the first case that I worked on. That was about Marlene Olive. But then, I realized that the medium was completely inappropriate for the subject matter. The iron-ons made the work about media, mechanical reproduction, Warhol, anything and everything but about the girls themselves. I struggled a great deal with how to best articulate the project. Then, in the middle of trying to solve all of this, I went home to visit my parents. My mother asked me to clean some stuff out of a closet and I found a drawing. It was a portrait I had done of myself when I was seventeen. It was graphite and terribly tightly rendered with all the teenage angst of hoping to make it look like a pretty version of me. I knew at that moment that I had to do drawings of all the girls. I needed to create tight, repressed, unexpressive and stylized drawings. I had not drawn anything for ten years.

MMC: They all killed their mothers, sometimes including the father and, in a couple of cases, the whole family. The girls were all adolescents, all in that grey zone between childhood and adulthood. The girls were blossoming sexual beings while their mothers could see their own sexuality waning. In all cases there was an extreme (though often unacknowledged) power struggle between the girls and their mothers. I tried to the best of my ability to find cases where the crime committed grew out of this identity struggle. I tried to stay away from cases that were fueled by insanity (sociopathic behavior), drugs, or self-defense. In other words if a girl was being abused by someone then rose up to kill that person, I wouldn't use that case.

Self defense is too rational. I was interested in the murkier tension. A sort of undefinable field where that resonated with me personally.

I do have some portraits like Sylvia Likens or Suesan Marline Knorr where the girl was murdered by her mother or caretaker. I used these portraits because I believe the mitigating factors came from the same internal girl/mom friction but in these cases the parent managed to get the upper hand.

AFH: When you speak with viewers about "Murder Girls" are most of them empathizing with the girls or their families? Do you think that the series inspires parents to confront anxieties about children potentially hiding secret selves?

MMC: There are a lot of layers within the work and people tend to connect to different combinations of things within the pieces. I am not generally privy to those experiences, although comments that I have heard run the gamut from fear, empathy, sexual attraction, voyerism, moral ambiguity, beauty, ugliness, tragedy, fashion illustration, heroism, guilt to awe. That said, I don’t do surveys to specifically see what people are thinking but at talks women often approach me and say they find the work extremely resonant. It makes them recall their own teen years and difficulties they had with their own mothers.

AFH: Were you a rebellious teenager?

MMC: I take the fifth.
http://www.artslant.com/ny/artists/rackroom/16588-marlene-mccarty

My only question to the artist is the inclusion of Sylvia Likens. Unlike the other girls, she wasn't a killer. She was a victim who was murdered by a maternal figure (a non-official foster mother) and a series of other adolescents her own age.