Daphne Oram (31 December 1925 – 5 January 2003) was a British composer and electronic musician. She was the creator of the "Oramics" technique for creating electronic sounds.

In 1959 she installed her Oramics Studios for Electronic Composition in Tower Folly, a converted oast house at Fairseat, near Wrotham, Kent. Her output from the studio, mostly commercial, covered a far wider range than the Radiophonic Workshop, providing background music for not only radio and television but also theatre and short commercial films. She was also commissioned to provide sounds for installations and exhibitions. Other work from this studio included electronic sounds for Jack Clayton's 1961 horror film The Innocents, concert works including Four Aspects and collaborations with opera composer Thea Musgrave and Ivor Walsworth.

In February 1962, she was awarded a grant of £3550 from the Gulbenkian Foundation to support the developments and research of her "Oramics" drawn sound technique. This method of music composition and performance was intended by Oram to allow a composer to be able to draw an "alphabet of symbols" on paper and feed it through a machine that would, in turn, produce the relevant sounds on magnetic tape. A second Gulbenkian grant of £1000, awarded in 1965, enabled the Oramics composition machine to be completed. The first drawn sound composition using the machine, entitled "Contrasts Essonic", was recorded in 1968.
http://en.wikipedia.org/wiki/Daphne_Oram 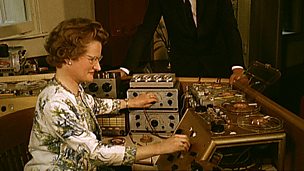 Oram left behind a hugely influential body of work when she passed away in 2003, including her famous "Oramics", a process of creating sound through hand-drawn 35mm film strips that were then read by a specially-constructed machine and converted into sound. The Science Museum ran an exhibition showcasing the machine last year; you can watch a short documentary about Oramics on their website. Much of Oram's work, taking in commercial, broadcast and performance commissions, was made after she left the Radiophonic Workshop after only a year due to the BBC's lack of interest in her more experimental work, and was recently collected on the 2007 compilation Oramics.
Ed Ledsham
http://thequietus.com/articles/15143-daphne-oram-walls-tom-richards-playlist The Oramics Machine allows the composer to feed a series of slides into the machine which give instructions about pitch, vibrato (the level of pitch modulation), tremolo (the level of volume modulation), overall volume and timbre (basically its harmonic content). Using a brown ink, the composer draws shapes onto the slides which influence those five parameters as they are read. The machine was designed so that there would be some continuously changing (or gliding) parameters, but so that the pitch would be "stepped."

Parameters like vibrato and level involved in expressive playing could be varied continuously but the note's output would fundamentally remain fixed for the duration of the note, not unlike the way in which a modern music sequencer works. Without this consideration, the machine would have sounded something like a Theremin, the familiar gliding synthesizer sound associated with science fiction movies. Instead it could be made to play a series of discreet pitches. In essence, Oram was building a sequencer in the '50s, with a far more complex design than the ones that eventually came to the market which could only influence one parameter of sound at once. We can only speculate as to how it might have impacted on popular music had it been available as a commercial unit in the way the Minimoog, for example, was. The engineer who helped build the system for Oram was a man named Graham Wrench. He had worked in radar technology during the War, and had come into contact with something called a "video mapper" which would scan a photographic image and superimpose it onto the radar image. This principle became the basis of the waveform scanner which was used in the Oramics system, though he adapted the idea to create a more cost-effective solution.

To build the Oramics system, Wrench used a Cathode Ray Tube, a piece of equipment which projects a dot of light onto a screen. (This is the same piece of equipment employed in CRT televisions to create a picture.) A photomultiplier at the other end would detect the presence of light anywhere on the screen. By using the ink-drawn slide to obscure the light at various points, it was possible to create a continuous voltage proportional to the outline of the waveshape drawn on the slide. By repeating this process very quickly—and by scaling the voltage to a sensible level—a continuous tone was produced. A similar mechanism was used to read the shape of complex level, vibrato and tremolo envelopes.

The story of Oram and her work has until now been a question of "What if?" It's clear that alongside names like Stockhausen and Schaeffer she was crucial to the development of electronic music during the '50s. Had her machine been developed and been available in the BBC studios, would it have changed the way people composed popular music? We will never know. Recently, however, the story has become less tragic than it seemed only a few years ago. At the very same point in history that the iOS has made freehand data input an almost universal possibility, interest in Oram's work is experiencing a fresh lease of life. The Oramics application for the iOS platform means that her system can be purchased for experimental purposes by composers who own an iPhone or iPad.
Benji Lehmann
http://www.residentadvisor.net/feature.aspx?1305

Similar in concept to Yevgeny Sholpo's Variophone optical synthesizer, the Oramics synthesizer encompasses a large, rectangular metal frame upon which pass ten synchronized strips of clear sprocketed 35mm film. Shapes and designs etched into the filmstrips are then read by photo-electric cells and transformed into sounds. Because the output was monophonic, multi-track tapes were required to create polyphonic textures.

The flexibility of control over the nuances of sound production afforded by the relationship between graphics and audio signals nevertheless positioned Oramics as a viable and innovative approach to electronic music production, however, and Oram continued refining her principles across a series of installations and exhibitions. In 1961, she collaborated with film composer Georges Auric to score the Deborah Kerr horror feature The Innocents, and a year later completed her first LP, Electronic Sound Patterns, in addition to writing advertising jingles for brands including Nestea.

Referring to the Oramics equipment, Oram wrote, “One lifetime is certainly not long enough to build it and explore all its potential.” And in fact the Oramics system would eventually move way beyond the drawnsound concept to become part of a far-reaching philosophy of sound. She later described Oramics as “the study of sound in its relationship to life”.

In 1960, as the Oramics studio was taking shape, Oram wrote a futurological manifesto updating Bacon’s New Atlantis and outlining a future soundhouse based on her own hopes and aspirations. She titled it “Atlantis Anew”: “We have also soundhouses, where we practice the healing powers of sound; where we analyze each human being’s innate waveform and induce those harmonics to resonate which have fallen out of sorts; where the criminal is put into a harmless, restful sleep until his mental powers have come to terms with themselves and he is again in harmony with mankind; where man and beast are given the means of communication, one to the other, so that man despises not the animal kingdom, nor any other form of life, no, nor even the ‘inanimate’, but humbly learns the wisdom derived from contact with another aspect.

“Here we learn the harmonic series of the elements, the cycles of the years, the oscillations of the tides, and the induced resonances from those forces far out in space. We explore the sounds which move boulders, the overtones which transmute the metals, but moreover, we acknowledge the wavelength of our own time and respect the existence of beings without that time, finding thereby means to produce summation tones penetrating the very fundamentals of these worlds beyond our frontiers. For here we excite by the subtle higher frequencies the inner consciousness of man linking him, in truth, with the infinite timelessness of that still point where all is comprehended.”

The Oramics equipment provided a holistic approach to sound, whereas conventional synthesizers offered merely a linear approach, with chains of modules connected in sequence. The Oramics machine allowed for close analysis of the interactions between different parameters, and the subsequent modification or amplification of any unpremeditated interplay. These studies of the subtle nuances and interactions between sonic parameters led her to explore the outer reaches of human perception.
Bill Smith
http://soundmorphology.blogspot.co.uk/2014/01/daphne-oram-unsung-midwife-of-synthetic.html

You could be eligible to get a free Apple iPhone 7.

Looking for the Best Dating Site? Create an account to find your perfect date.

If you want your ex-girlfriend or ex-boyfriend to come crawling back to you on their knees (even if they're dating somebody else now) you got to watch this video
right away...

(VIDEO) Why your ex will NEVER come back...

Follow our signals right now and profit up to 270% daily.

Seeking to join additional affiliate programs?
Visit my affiliate directory to get the ultimate list of affiliate networks.