Richard Wentworth - Making Do and Getting By 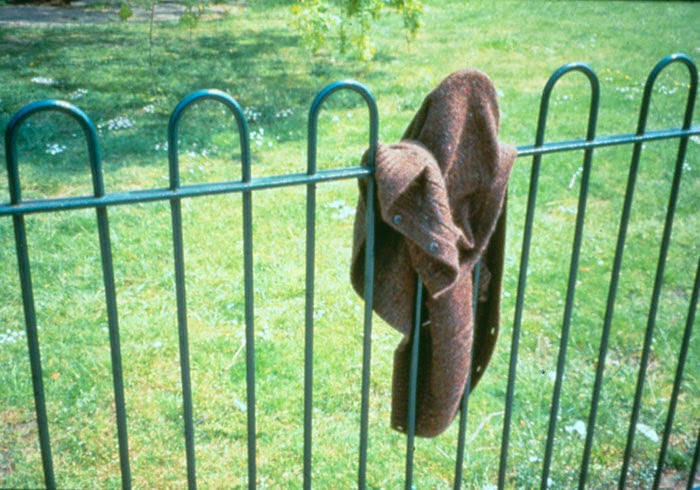 Richard Wentworth CBE (born 1947) is a British artist, curator and teacher. He was Professor of Sculpture at The Royal College of Art, London from 2009-11.

Wentworth became identified with the New British Sculpture movement. Wentworth’s interest is the juxtaposition of materials and found elements that do not belong together. Wentworth is also interested in the bizarre coincidences of urban life that he documents in photographs.
http://en.wikipedia.org/wiki/Richard_Wentworth_%28artist%29

Richard Wentworth is best known as a sculptor whose work tends to focus on the idea of transformation in alteration and juxtaposition of everyday objects. Looking at his works our perception of our world is changed too, because of the alteration of the connotations of those objects and their inherent symbolism.

The images below are from his photographic series Making Do and Getting By in which he observes the ingenuity of humankind in the appropriation and adaption of everyday objects for new uses, new meanings, and new narratives. A wellington boot becomes a doorstop, a cup becomes a window prop, a brick and piece of board become a ramp, a book becomes a means to steady a chest of drawers (but is rendered impossible to read).
Johanna Dennis
http://camberwellillustration1.blogspot.co.uk/2009/12/richard-wentworth-making-do-and-getting.html

The way objects are arranged in Wentworth’s work bears a strong relationship with the fragility and precariousness of positioning found in the way we deal with objects in daily life. Placing a cup of coffee on top of a book that is just too narrow to hold it completely, is the kind of everyday balancing act that we perform without thinking, and which demonstrates, when we do think about it, just how well developed our sense of natural physics really is.

Often these qualities are combined with a related formal associations. Placed as if laid down to await future use, the two beakers in Lapse look like binoculars, yet do not invite their use in that manner. A single stainless steel beaker and an unglazed earthenware flowerpot are the same shape, and share a visual similarity, yet their differing sizes and textures mean that they are not interchangeable: drinking tends not to be associated with rough, porous surfaces. Paradoxically, these visual similarities force home what it is about the two objects that makes them different and unsuitable for each other’s tasks.

This sense of recognition of difference is touched upon in another recent work, entitled Balcone: a kind of identity parade of farm implements, that plays upon the extraordinary diversity of tools created in different cultures in response to the same basic needs. Perhaps, if it can be said that there are typically English, or Italian, faces, that there may be typically English and Italian tools, whose differences are of variety rather than function. The differences in approach and end product are legible because we understand the needs that formed them. A Spanish hoe and a Dutch hoe may have variations in design, but they are both used to dig up weeds. There is a certain cultural pleasure in discovering their differences, and a sense of satisfaction in the fact that we can identify the items at all.

One of the most surprising aspects of Wentworth’s sculpture is its very legibility . This is echoed in the photographs from the series Making Do and Getting By - Wentworth’s global mapping of imaginative incident - where the same attempts to wedge things open, prevent access and keep things dry are found solved in very similar ways from Barcelona to Peking. Local differences add colour and provide insights into how variables like climate, housing and public facilities may differ from country to country, but the overall impression is one of the extraordinary similarity of situation that people find themselves in the world over, and have to come to terms with using their own devices when readymade solutions are not to hand.
James Roberts
http://www.frieze.com/issue/article/speaking_in_tongues/

Artist and photographer Richard Wentworth registers chance encounters of oddities and discrepancies in the modern landscape. Renowned mostly for his readymade sculptures but also known for his photographic series, namely Making Do and Getting By, Wentworth is inclined to explore the nuances of modern life and the human role therein.

Mundane snapshots and fragments of the modern landscape are elevated to an analysis of human resourcefulness and improvisation, whereby amusing oddities that would otherwise go by unnoticed become the subject of intent contemplation.

Wentworth captures pictures of improvisation, where objects are removed of their original context, stripped of their ordinary function and yet often rendered functional in an altogether new and unexpected way. A car door serves to mend a wire fence. Wooden crates, wedged into a doorway, exert the function of a door.

There occurs a rupture between object and function, which allows a subsequent rupture between function and meaning. Meaning is no longer hinged on the commonplace and uniform functionality of the mass produced object, but rather augmented by the unfamiliar and, thus, noteworthy new function with which the object is instilled. Wentworth’s photographs bear witness to instantaneous transformations, wherein everything is celebrated for its conversion into something else.

Such encounters with incoherencies in the modern landscape, resulting mostly from the mutation of function, are injected with an inherently human vigour, despite the blatant absence of the human figure. It may even be argued that the centralised objects stand in for the metaphysical human presence they symbolise, precisely by occupying the central foreground, which, in popular amateur photography, is generally inhabited by the human figure.

His subject matter deals primarily with a vision of a deliberately altered modern space of which, in Wentworth’s own words, “the chief components are humans who simply don’t conform to the rules”. It signals a sort of victory over the mass-produced, materialistic modern world, for it is both due to and in spite of the absent human figure, that its unique metaphysical presence becomes manifest.
Just as Wentworth renders the familiar unfamiliar, he converts ordinary situations into insightful remarks on seemingly mundane but rather extraordinary human experiences of modern life.
Renata Bittencourt Grasso
http://www.gupmagazine.com/blog/120-making-do-and-getting-by

If you want your ex-girlfriend or ex-boyfriend to come crawling back to you on their knees (no matter why you broke up) you have to watch this video
right away...

(VIDEO) Want your ex CRAWLING back to you...?