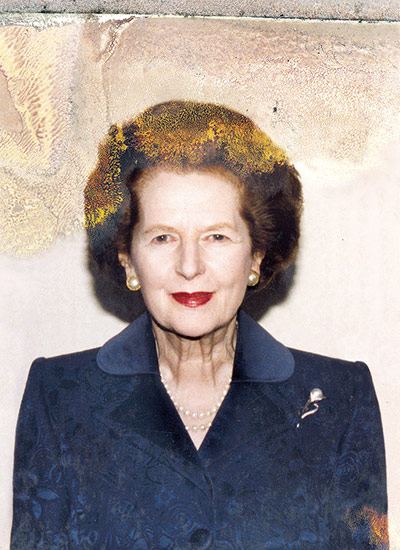 Lisa Barnard’s photographic practice is connected to both fine art and documentary genres. Her work connects her interests in psychological aesthetics, the limits of photographic film alongside the documentation of both the real and the imaginary.
http://lisabarnard.co.uk/resources/biography/ 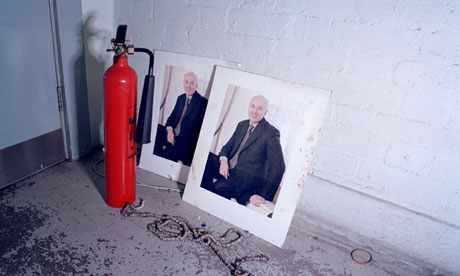 This publication is made up of a series of photographs taken inside the abandoned Conservative party headquarters at 32 Smith Square. Award-winning artist Lisa Barnard was granted access to the site in 2009 and documented the building and found objects.

32 Smith Square was Conservative Central Office from 1958 to 2004.The building is synonymous with Margaret Thatcher smiling and waving out of the window on the 2nd floor after winning the elections of 1979, 1983 and 1987. However, by 2004 the building became known as ‘Chateau Despair’ to its inhabitants, prior to the Conservatives’ move to Victoria Street. They left behind a mausoleum containing nearly 50 years of their political history, etched on its surfaces and discarded in its corners.

This book features previously unseen photographs of the interior documenting the dulled shades of corporate blue, stained carpets, peeling paintwork and discarded iconography of past alliances. Carefully choreographed portraits of a smiling Thatcher, unearthed in an old cupboard, punctuate the book, jarring with the shabby interior. The book also includes photographs of the objects, or remnants, Barnard found in the building including a blue rosette, an internal envelope, an ornate silver spoon, a balloon and a strip of film negative.
http://www.gostbooks.com/books/31/chateau-despair

Thatcher fans should avoid Chateau Despair. They will not like it. In this strange but interesting limited edition, the photographer Lisa Barnard has collected some of her prints of the interior of 32 Smith Square, the building that was Conservative central office when Maggie was in her prime, and which was left unoccupied for a long time after the Tories deserted it nearly 10 years ago. It was here that her campaigns were plotted. It was from here that she would first appear on television on election night to celebrate her victories, waving from the balcony as adoring party workers chanted "four more years!". Treating the building and its forgotten contents as a sort of political mausoleum, Barnard shows us shabby and empty blue spaces, stained carpets and crumbling plasterboard, stopped clocks, empty chairs and abandoned shoes. The detritus of old political battles is represented by images of shrivelled campaign materials, faded rosettes and unblown balloons. The effect is quite spooky. These haunted images are punctuated by portraits, retrieved from a long forgotten cupboard, of the former chatelaine. There's the face that ruled Britain for more than a decade in the pose that became so embedded in the national consciousness: the purposeful lips, the regimented hair, the signature pearls clipped to her ears and hung around her neck, and the drilling blue eyes which François Mitterrand once likened to Caligula. The photos are in a corrupted state, aged and bleached, providing a visual metaphor for the passing of glory and the fading of pomp.
Andrew Rawnsley
http://www.theguardian.com/books/2013/mar/25/chateau-despair-iron-lady-shephard-review

Lisa Barnard’s new photobook Chateau Despair was born out of a commissioned photo-project in which she documented the abandoned Conservative Central Office at 32 Smith Square – HQ for the Tories from 1958 to 2004. The majority of images in the book are interior photographs of a building that has lost its place in the world. Scratched walls, empty hallways, missing appliances – these are the signifiers of architectural decline. The overall impression of malaise is underscored by the colour blue, the official colour of the Conservative Party. The images are purposefully ‘cold’: both in terms of colour symbolism and in terms of Barnard’s dispassionate photographic methodology.

Barnard makes some surprising discoveries in the abandoned building: a forgotten pair of shoes, a tear in the shape of a laughing mouth cut into a studio backdrop, or, what appears to be, a bright red rocket leaning against the wall. These photographs, subtly humorous yet still matter-of-fact depictions of an interior space, are strongly reminiscent of the work by the Canadian photographer Lynne Cohen. Despite the lack of people in these images, the presence of man is emphasized by these quirky interventions.

Looming over this body of work are a number of scanned images depicting the former Conservative Prime Minister Margaret Thatcher. Her status as political and ideological icon in the UK is emphasized by including several seemingly identical images of her. Although in each image she is shown with the same bright red lipstick, the same immaculate hair, and the same confident smile into the camera, each image differs slightly from the others, as well as to the extent it has physically deteriorated. Watermarks and dirt are creeping up on them, while a fingerprint gives an indication on the actual size of the original photograph. The decline of the building is thus mirrored by the imperfections represented in the damaged portrait of Thatcher.

Inasmuch as the photobook documents the remains of a once-thriving party headquarters, the project also alludes to Thatcher’s immense impact on political, economic and social issues in the UK. Her knowing smile not only affects our reading of the interior photographs of Chateau Despair, it equally affects our understanding of current debates such as those on housing, social security, immigration, foreign relations or economic policies. Her presence is akin to that of a phantom. This is particularly the case with regard to the current Conservative-led coalition government that consistently tries to locate its own position in relation to the Thatcher years.

In spite of the re-emergence of Conservatism in the UK, the photographs strongly allude to the collapse of an ideological and political framework. The abandoned rooms at 32 Smith Square perhaps evoke comparisons with representations of other fallen regimes such as Daniel and Geo Fuchs’ photographic series on STASI buildings in the former GDR. To the back of the book is a collection of fifteen scanned images of objects Barnard has found in the building. Chateau Despair fulfills the archaeological function of archiving a vision from the past.
Marco Bohr
http://visualcultureblog.com/2013/03/chateau-despair-by-lisa-barnard/

Chateau Despair by Lisa Barnard from GOST Books on Vimeo.
Posted by _Black_Acrylic at 22:55

If you want your ex-girlfriend or ex-boyfriend to come crawling back to you on their knees (even if they're dating somebody else now) you must watch this video
right away...